Fun Day Trips to Take on Your Cancún Holiday

It’s not all sombreros and tacos on a holiday to Mexico. If you’re staying in Cancún there are lots of day trips to get you out of the souvenir shops and busy beachfront cafes! From Mayan ruins to underground museums, to living your childhood dream of swimming with a dolphin, here are the best day trips from Cancún – and you can book them all with Tiqets.

When in Mexico you might want to put this weird and wacky underwater museum on your list.  MUSA (Museo Subacuático de Arte) was dreamed up by British sculptor Jason deCaires Taylor in 2009 and gives you the chance to snorkel around 30 incredible underwater sculptures, from life-sized humans to dinner tables and cars. All have been constructed using special materials designed to boost coral life, and a visit here will give you plenty to talk about for days. Get there by glass-bottomed boat and be wowed by the only museum of its kind in the world!

Get your tickets for the Underwater Museum Punta Nizuc: Snorkeling + Glass-Bottomed Boat

See a wonder of the world at Chichén Itzá

As one of the Mayan’s biggest cities, and a sacred site of worship before the fateful Spanish invasion, Chichén Itzá is one of the most important historical sites in Mexico and a UNESCO World Heritage Site you’ll be glad you came to see. Climb the sacred pyramid temples, learn about the sinister ‘Platform of Skulls’, and witness the towering 30-meter high Pyramid of Kukulcan, built between 800 and 900 AD and named after a Mayan snake deity. It’s magical, mystical and historical, and it’s officially recognized as one of the New Seven Wonders of the World.

Get your tickets and Skip the line to Chichén Itzá

Animals, rivers and rides at Xcaret

This action-packed eco-archaeological theme park blends hair-raising rides with mesmerizing nature and history that’s fun to learn. Wander around the traditional Mayan village and Jaguar Island and get close to sea life in the aquarium. Watch the exotic birds flapping around in the aviary, swim through underground rivers, scale the Scenic Tower and take the kids to cool off in the Children’s World adventure playground. Developed around a legendary archaeological site, Xcaret is a thrilling experience and a great day trip from Cancún.

Get your tickets and Fast-track your way into Xcaret

Explore the Mayan ruins of Tulum 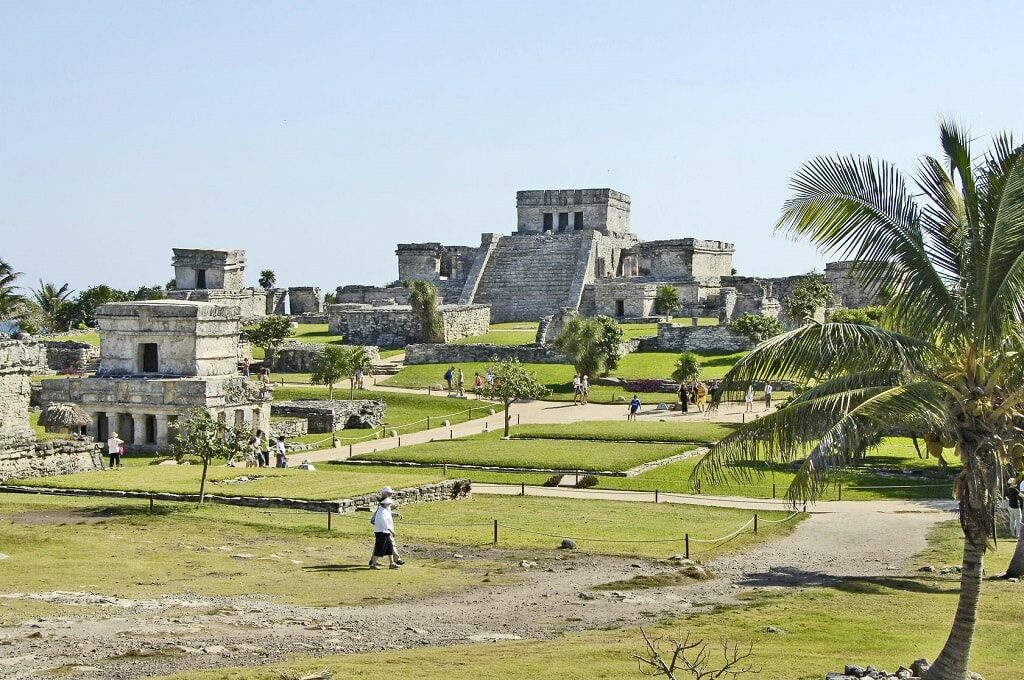 The ancient Mayan city of Tulum was one of the last cities to ever be inhabited by the Mayans, and its preserved frescoes and fortified walls is a history lesson in real life. Explore what was once a sacred site and major trading hub with a fact-filled guide and see the Castillo, thought to have served as an early lighthouse. See the Temple of Frescoes, El Castillo, Temple of the Descending God and more, then take a dip in a freshwater cenote. An enlightening day trip from Cancún to a stunning part of the Caribbean coastline shrouded in history.

Ever wanted to swim with a Spanish-speaking dolphin? We assume they speak, or at least snort in Spanish here on Isla Mujeres. Ride the ferry from Cancún to Isla Mujeres, tuck into a continental breakfast and then make all your aquatic dreams come true with a 40-minute encounter in the water with the dolphins! Learn their special handshake, get a hug and a kiss and opt for additions like the chance to take a ‘belly ride’, or the chance to have your photos taken with Flipper.

Put your brain cells to the test at Xenses Park

Journey through Superman’s cave and enter a destabilizing vortex at one of the craziest attractions in Mexico. Stun your senses with over 50 experiences in the air, on land and in the water, from interacting with gnomes and giants, to feeling the beat of a big red heart.  If covering yourself pig-style with mud in the Sludgerie is too messy, calm things down with some Riverlaxing, or test your brain power with visual games and optical illusions. Xcaret’s new park, Xenses Park, is one of the most exhilarating things to do in Cancún and Riviera Maya!

Get your tickets for Xenses Park: Fast Track

Discover all the other sites Cancún has to offer, or read the blog for more travel inspiration.

The hottest shows to see in Las Vegas right now