Five things you should NEVER do in Dubai 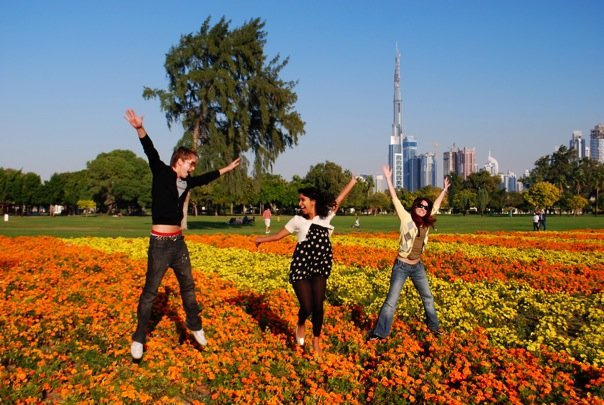 It's not all sand in Dubai!

Ah, Dubai. The five-star city of sparkling malls, breakfast on catamarans, and more bling than a rapper’s Christmas party. You’ll find all sorts of posts out there about what to do in Dubai, but here’s what you should probably never do. Ever.

1. Never get a sandwich from Subway

It’s not every day you get to order a foot-long crap for lunch, but if you really fancy such a delicacy, it can be found on the Subway menu. When I told a friend who works in Subway’s UK marketing department about this, I think some action may have been taken towards getting it off the Dubai menu quick sharp, but alas, the lovely man at the other end only spoke Arabic and didn’t really seem to understand what was wrong: “But it is a nice sandwich, inshallah?” (Bless).

What you should do instead: Get your rumbling belly on board a Dhow for a sumptuous five-star dinner cruise. I did one of these once and there were heaps of hot, rich men on board, and that’s not even including the Emirati dancers! The food wasn’t so crap, either.

2. Never let the models get you down

When this stunning 20-foot model took the microphone off me at a karaoke bar, I was clearly annoyed. But the thing about Dubai is that there are thousands of beautiful people flocking there for the sun and that’s part of what makes it so alluring. I pouted for a bit, but then I asked this model to sing a duet with me and do you know what? She was rubbish. It made me feel so much better.

What you should do instead: Remember, beauty is on the inside (of most five star bars and hotels), so radiate your own gorgeousness and join in! Start with a cocktail in Atmosphere. It’s the bar in the world’s tallest restaurant located on the 122nd floor of the Burj Khalifa. If no one rich approaches you at the highest of Dubai’s heights, at least you won’t be the only one feeling small.

3. Never forget to put sunscreen on your bits

This is a lesson I learnt whilst camping in the desert with my friends – I burnt my backside so badly I could barely sit down for three days. I’ll spare you the photo of that. Instead, look again at that one of me and my mate Helen up there. Don’t we look happy? (That was before I knew about my backside). Seriously folks, that sun is hotter than Jamie Dornan walking naked across smouldering coals. Yeeooowww!

What you should do instead: Rather than camping in the desert, which also puts you at risk of freezing your toes off at night (trust me, you can’t win out there), do a little desert safari instead. Speeding up and down the dunes in a 4×4 for a couple of hours is awesome, and you don’t have to burn your bits by putting up any tents. Bonus!

The 20-foot models are one thing, but everything in Dubai has to be bigger and better than everywhere else. Just look at those blimmin champagne bottles! (Good thing we didn’t drop them, they were worth about two-grand each). The Burj Khalifa, as you know, is the world’s tallest building, and the world’s biggest indoor theme park boasts over 60 life-sized dinosaurs. Yes, you read that right. Let’s hope they’re not literally planning to make them move – we all know how that one ends.

Anyway, it seems the world’s biggest overachievers flock here too, but don’t be alarmed.

What you should do instead: Actually, go to the huge park, it’s airconditioned.

There are a lot of rules in Dubai; something I realised when I took this photo of a sign opposing photography. While it’s a very family-friendly place, you’ll have to make your public displays of affection private. Forget wearing a bikini or shorts in a shopping mall if that’s your style, and please don’t even THINK about getting into a taxi drunk. Drunkenness is not allowed. Neither is drinking alcohol outside of a licensed establishment… which usually means you’ll spend your nights in five-star hotel bars. Not such a bad thing.

What you should do instead: If you really can’t keep your hands off each other, fly high above it all and get kissy kissy with your lover in a helicopter! You’ll get to see the city from above, and take all the couply shots you like without offending anyone!

**All words and photos by Becky Wicks

Other cities to visit this summer

Not so fond of sun and sun? Don’t worry, there are plenty of other top cultural cities to visit this summer. Have a look on Tiqets.com