7 Interesting Ways to Spend a Weekend in Barcelona 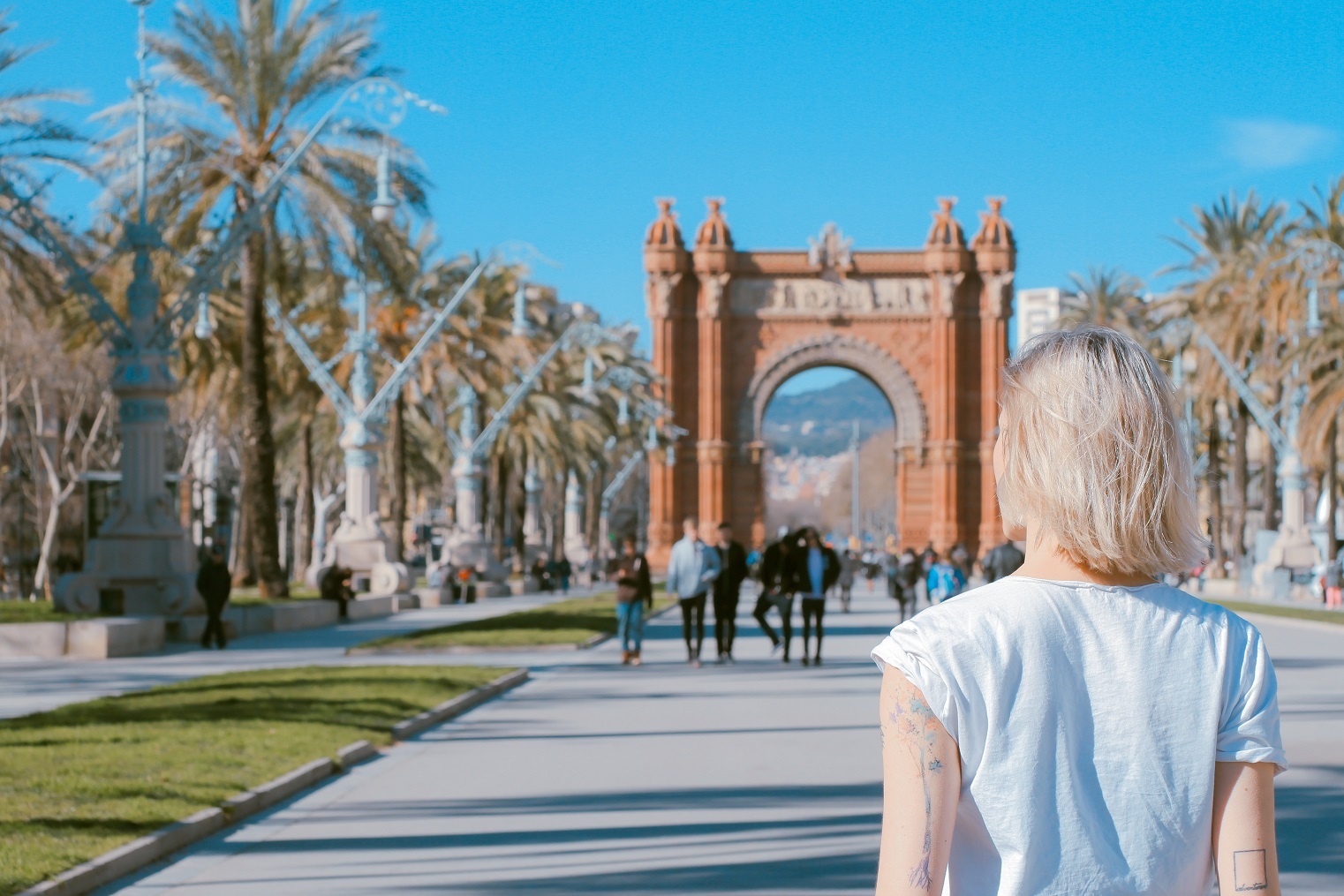 There are so many fun things to do in Barcelona that knowing where to even start can be a challenge. From pristine stretches of white sandy beaches to elegant streets lined with Catalan Modernisme, and secret places hidden from the tourists, it’s a wonderland of culture that makes for the perfect city break. So, no matter what your idea of fun is, you’re sure to enjoy a weekend in Barcelona.

We’ve rounded up seven of the most spectacular spots from across the spectrum of Barcelona’s cultural treasures, to make sure you’ve got all your bases covered for your weekend adventure in the Catalan capital.

Two birds, one stone. Park Güell, is located in Barcelona’s green heart, Carmel Hill – and both are cool spots in their own right. Carmel Hill is located on the northern face of the Collserola mountain range, so hiking it pretty much counts as going partway up a mountain… right?

Luckily, getting there isn’t a monumental task, as the hill is easily accessible from the city center by metro. After a short hike up along a sleepy hillside neighborhood, you’re in Park Güell. You can explore lookout points that give way to incredible ocean views and stroll along various footpaths to find Gaudí’s playground of artistic outdoor design carved into the slopes.

Park Güell is art imitating nature in its purest form. Jagged man-made columns sink into the rocky hill surface, while mosaic structures dot the landscape. Visiting Park Güell is free, but you need to pay to enter the Monumental Zone, which has museums, the famous ‘el drac’ mosaic salamander, and Gaudí’s house.

Walk another 20 minutes from Park Güell to find Bunker del Carmel, pop open a bottle of Spanish wine, and enjoy the panoramic views of Barcelona and peaceful seclusion from this less-traversed lookout point.

Here’s a fun fact: it’s said that Montjuïc derives its name from an old Jewish cemetery that was once on the mountain. Montjuïc itself means ‘Jew mountain’ in Catalan. Whatever the real story is, Montjuic offers a stunning lookout point, and you’ll spot the castle on the mountain from most places in the city. It’s simply a must for a weekend in Barcelona.

Venture up on Montjuïc’s breathtaking cable car for the most exciting view in Barcelona. The cable car starts at Barceloneta Beach and whisks you 70 meters above the ground in 10 minutes flat. At the peak, you can explore Montjuïc Castle – which was an old military fortress, visit the Joan Miró Foundation, and see a World Exposition site in the form of the Teatre Grec. Another fun fact: Montjuïc’s municipal pools were the set of Kylie Minogue’s music video for ‘Slow’.

Camp Nou needs no introduction, but here’s the general lowdown: it’s the home stadium of FC Barcelona, and it’s the largest stadium in Europe (third largest in the world). As a structure, it’s a celebration of football. For most football fans, Catalan or otherwise, Camp Nou is a pilgrimage site.

While some might be lucky to catch a match here, you can always opt for a tour if there’s nothing on. Though we highly recommend shelling out for a seat if there’s a match happening; you can purchase affordable match tickets from various official booths scattered around the city. Nothing quite beats being surrounded by 98,000 fans screaming ‘Barça, Barça, Baaaaarça’ as football’s greatest show off their dazzling skills.

Make sure to check out the Camp Nou Museum which has immersive exhibits like giant touch screens, sound installations (including match-day sounds), historical stats, and the endless trophy cabinet that’s the envy of Europe.

Another great way to make your stay in Barcelona memorable is to take a day trip to the ethereal mountainous terrain of Montserrat. Its jagged ridge stands out like a serrated blade against the sky; hence the name. If you’re looking for adventure, the best way up is on foot. It’s the only way to appreciate the mountain’s wild beauty, and at a mere 1,236-meter elevation, it’s not too challenging. But if you’re looking for an easier route, consider the cable car.

Once there, the picturesque town of Montserrat appears to be carved out of the mountain’s face and is home to the Santa Maria de Montserrat Abbey. There’s an array of cafes and restaurants here, but be warned, they can be pricey. For the best experience on this side of the mountain, trek further up to an abandoned chapel at the peak, and scale the rocks to a natural lookout point for unreal, uncrowded views of the Catalonian countryside.

If you’re departing from Barcelona, the ‘Tot Montserrat ticket’ makes getting there convenient, as it gives you transport from Plaça d’Espanya to Montserrat, and round-trip access to both the cable car and funicular.

Most of us have heard of Gaudí, but his collaborator, Josep Maria Jujol, deserves his day in the sun too. Some iconic works attributed to Gaudí are, in fact, Jujol’s creations, such as Park Güell’s sinuous mosaic benches, most of Casa Milà’s facade, and the colorful exterior that Casa Batlló is so famous for.

Jujol was 27 years younger than Gaudí and he crafted his own path in Catalan Modernisme, opting for a softer and more playful style. If we’re talking secret spaces, it doesn’t get any better than hidden caves. Beneath the Sansalvador estate is a series of tunnels designed by Jujol. They are eerie, organic, and surprisingly functional.

The story goes that during the construction of the house, a water mine was discovered with alleged radiological and medicinal properties. Dr. Sansalvador commissioned Jujol to build grottos to access these medicinal waters. Visitors can enter Jujol’s underground world on the second Saturday and fourth Sunday of every month.

You can’t experience any place properly without tasting its food – and Barcelona has a lot of food to offer. From turn-of-the-century market halls to the tourist-favourite La Rambla, you’re spoilt for choice. While La Boqueria draws the crowd, you’ll find that lesser-known spots, like Santa Caterina Market, offer tastier tapas at more appetizing prices.

Located in the trendy El Born neighborhood, this place is packed with young locals drinking cerveza all day long while nibbling on freshly made tapas. Santa Caterina Market is small but packs flavor. The exterior has an unmistakable wavy roof while its interior is airy and features colorful mosaics. You can easily score a decent meal for two here for under 30 euros – wine included!

When you drink in Bar Marsella, you’re not just drinking in Barcelona’s oldest bar, you’re also drinking in a bar that’s said to have been frequented by Dalí, Picasso, Gaudí, van Gogh, Hemingway, and other famous creatives.

This iconic absinthe bar dates back to 1820 and has persevered through centuries of development that has otherwise changed the city’s landscape. Stepping inside takes you back to a time when the spirit of Bohemia was rife with energy, and the revolutions of the 19th century were knocking on the doorsteps of Europe.

Bars such as these saw history come and go, and served it up a drink along the way. It’s a local gem, hidden in a nook of El Raval. And while its floor tiles get more weathered and its once opulent chandeliers become grimier, Marsella only seems to grow on you the longer you stay here. Then again, that could be the absinthe!

These seven places are probably more than enough to fill up a weekend in Barcelona. If you’ve never been to the Catalan capital before, you can swap out some of these lesser known locations for one of Gaudí’s glorious structures.

Keen on seeing more of Gaudí greatest hits? The city of Barcelona is generously sprinkled with Gaudí’s gorgeous creations. We’ve rounded a list of Gaudí essentials to see in the Catalan capital.