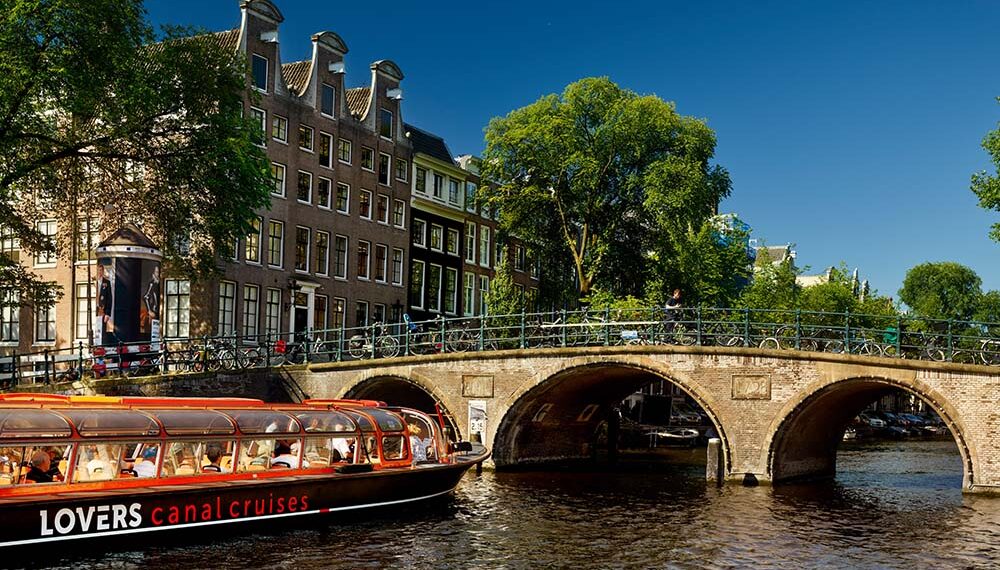 Stick your head out of the roof and risk running into one of the canal's 1,500 bridges

24 hours in Amsterdam isn’t much time, but you can cram a lot in if you put your mind to it. Here’s where I send my friends when they’re in town and have no clue what to do first.

7 am: Cycle through Vondelpark

I know what you’re thinking – why the hell would I get up early to go to a park? Can’t I just go later? Well, yes, if you like, but you’ll miss out. Biking through an early-morning mist in Vondelpark is like stepping into a Rembrandt painting, where grass shimmers and fountains burst and… commuters rudely ring their bells at you for taking photos in their path.

OK, Rembrandt never had to deal with that crap, but let’s just say the ethereal beauty of it all is worth losing a lie-in. Any time of year is pretty here, actually. If you need a bike to rent, these guys have got you covered.

9 am: Get the Rijksmuseum out of the way

You know you have to see it. And why wouldn’t you want to? With 800 years of Dutch art and history, and 8,000 objects across 80 galleries (they must like the number 8), there’s plenty to ensure you’re properly cultured up at this monster museum.

Getting in early is best, though. It’s no fun pondering the real meaning of Rembrandt’s Militia Company of District II under the Command of Captain Frans Banninck Cocq (AKA Night Watch) when you’re being jabbed in the back by a tour group and their iPads (trust me, I’ve been there). Ensure speedy entrance and get your skip-the-line tickets first.

12pm: Eat your way around Foodhallen

Forget the tourist traps around the museum – you have two wheels and you’re damn well going to use them like a local. Hop back on that bike and make your way over to Foodhallen, a haven of all things edible that would give even the likes of Pac-Man FOMO.

Located in the De Hallen cultural complex, Foodhallen is the sumptuous star of Amsterdam’s hip Oud-West neighborhood and there’s a variety of food stalls waiting to lure you in. Oysters, burritos, sushi, you name it, it’s here in this funky old warehouse. There’s even a gin bar. Treat yourself to lunch, lunch, and maybe a third lunch (listen, life is short).

After all that food you’d be forgiven for wanting to plant your butt in a chair outside a Leidseplein bar and watch the stoners tumble out of The Bulldog. But no. Time is of the essence. Once you’ve cycled to Leidsekade 97 (in front of the Amsterdam Americain Hotel), got your ticket and parked your bike, it’s time to take to the water on a canal cruise of Amsterdam.

Plant your butt in a chair outside a Leidseplein bar and watch the stoners tumble out of The Bulldog. Oh go on then, just for a happy hour tipple, and maybe some bitterballen. What’s bitterballen, you say? Order it and thank me later.

The Dutch are punctual and take their dinner at 6 pm sharp. With only 24 hours in Amsterdam, follow local customs to free up time for a nightly stroll. Amidst the pizzerias and burger joints of Leidseplein, a gastronomic gem hides in plain sight. De Blauwe Hollander is traditional Dutch cuisine done exceptionally well. Andijviestamppot, kaaskroketten, and knolselderijsoep are delicious dishes of which the names alone are a mouthful!

Yes, it’s busy and seedy as hell, but this is Amsterdam and we have to try to love all of it, not just the clogs and cheese and cute little windmills. Deal? Prostitution is the oldest profession in the book and you can stare it in the face in De Wallen as you dodge the stag and hen parties.

If you want a guide who’ll tell you more about the history of the place and make you feel a bit better about wandering red-lit cobbled alleys at night, there’s a tour that starts at 8pm at Dam Square – just a 5-minute walk from the Red Light District.

9.30pm: Pilsners and people spotting at its best

Don’t think you’ve seen it all after touring the Red Light District? A visit to the Warmoesstraat will ensure you’ll get to cross a few more clichés of your list. This hotspot for cheap hotels, gay leather bars, coffeeshops, and the occasional cool cafe is great for downing a few pilsners while people spotting.

The first time I ventured into a FEBO I was 18. I was so entranced by the pairs of hands sticking hot breaded nuggets into little vending machine windows that I almost got pickpocketed. I caught the pimply-faced Fagin in action, one hand in my purse, the other on his FEBO chips with satay sauce (this stuff is sooooo good).

I’d like to say I stopped him by smearing my cheesy, beefy… whatever it is that’s in this stuff… croquette in his face, but these babies are also way too delicious to waste, so I shouted at him instead. Get yourself some FEBO snacks. You won’t regret it. But hold your bags tight while you’re feeding coins into those slots.

Of course, this is just scratching the surface, but with 24 hours in Amsterdam you can’t do it all. For more ideas head to Tiqets.com and check out our other posts.