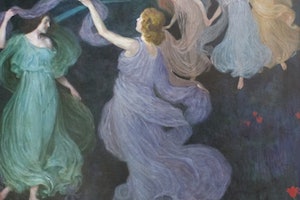 How do you turn a musical symphony into visual art? Ask Josef Maria Auchentaller. Klimt's colleague and verified Art Nouveau nerd, Auchentaller used Beethoven's Symphony No. 6 (the Pastoral Symphony) as the inspiration for his monumental pictorial program. The ensemble consists of five paintings and represents the first artistic-pictorial realization of all the movements of a Beethoven symphony. It set off the trend for the decorative music room tradition, which experienced its heyday around the 1900s.

Marking the 250th birthday of Beethoven, the ensemble will be reconstructed for the first time at the Leopold Museum. Uncover the gesamtkunstwerk, the total work of art achieved between visual art and music – the focus of this exhibition.

The Leopold Museum houses one of the most important collections of early 20th-century Austrian art. Avid art collectors Rudolf and Elisabeth Leopold collected more than 5,000 exhibits over five decades. Housed in Vienna's popular MuseumsQuartier, the Leopold's dense collection features artists such as Egon Schiele, Gustav Klimt, Oskar Kokoschka and Richard Gerstl. The collection was consolidated in 1994, and in 2001 the museum opened its doors to the public.

When young medical student Rudolf Leopold purchased his first work of art in his mid-twenties, nobody could have predicted that it would become an obsession.

Forty years later Rudolf Leopold consolidated more than 5,000 artworks and objects into a private foundation valued at 575 million Euros. The collection, in its permanent home in a museum purpose-built by the Austrian state, is the largest and most-visited museum in Vienna's MuseumsQuartier.

The main focus of the collection is Austrian art of the first half of the 20th century, and includes the world's largest collection of works by the influential Austrian Expressionist Egon Schiele. The focus is his radical and expressive works, created between 1910 and 1915.

There's also an impressive set of works by world-renowned artist Gustav Klimt - co-founder of the Vienna Secession in 1897.

The permanent exhibition Vienna 1900 allows visitors to experience the diversity of an era marked by the idea of the Gesamtkunstwerk, (a 'total work of art' that permeates all aspects of life). The works on display here include Expressionist paintings, pieces from the Vienna Secession, and masterpieces of the Wiener Werkstätte - the Viennese arts and crafts movement.

Show your smartphone ticket at the fast-lane cash desk, which has the Tiqets logo on it.

4.8
based on 99 reviews
5
4
3
2
1
82
17
0
0
0
I
IOANNIS,  Greece
Jan 12, 2020
Excellent
I was really impressed by the way the museum presents the secession, which was one of the most revolutionary movements in the history of art.
E
Evgeniia,  Russia
Jan 5, 2020
Excellent
The museum is definitely worth seeing, the collection is magic! And the good thing is not to wait the whole line, which is usually quite big
A
Arthur,  United States
Dec 30, 2019
Excellent
Fabulous

This ticket includes a single entrance to the venue. Have a look at the section titled 'Ticket' to get a better idea of what you can do with this ticket.
Discounts for different age groups vary per product. You can find discount related information while selecting your tickets in the checkout. When choosing your tickets, check for ticket types with discounted prices. For example, some products have a ticket type 'Child', which is specifically for children. Remember to bring a valid ID to the venue if you've purchased a discounted ticket.
We support popular payment methods used across the globe, notably Visa, Mastercard, Paypal, Alipay and iDeal. Some payment options are specific to the language and currency combination you use when ordering tickets.
You don't have to print these tickets. See the section titled 'Instructions' on the product page for more information on this. Download the Tiqets app to get access to your tickets on your phone - even when offline.

The Belvedere Palace is in fact two palaces: the Upper and Lower, both of which were built by Prince Eugene of Savoy. These Habsburg palaces are the centerpieces of gorgeously landscaped gardens, with tiered fountains and statues nestled in the greenery. Both palaces are filled with priceless art in the permanent collections (including Gustav Klimt's The Kiss), as well as changing exhibitions.
4.7 / 5 (512)
From
$19.33
Vienna

With around 65,000 drawings and more than a million old master prints, the Albertina is a mightily impressive collection of art. Located in the largest Habsburg residential palace, the collection also includes more modern works - including two significant collections of Impressionist and early 20th-century art, and temporary exhibitions. Also on display are 21 exquisite Habsburg state rooms, spread over two floors of the palace.
4.8 / 5 (1530)
From
$20.41
Vienna

Kunsthistorisches Museum features an extensive art collection that belonged to the once-mighty Habsburg family. It houses pieces by Caravaggio and Titian - and many other Renaissance and Baroque masterpieces. Viennese classical composers once made groundbreaking music with some of the instruments in the Historical Musical Instruments section. There are also impressive collections of coins, arms and armor, as well as Egyptian, Near Eastern, Greek, and Roman antiquities.
4.8 / 5 (472)
From
$19.33