Top 5 things to do in Berlin

1. Pergamon Museum
The popular Pergamon Museum in Berlin is a great solution to a first world problem; it was built because there wasn't enough room in the nearby Bode Museum for all its artistic and archaeological relics. Construction carried on even through WWI and the great inflation of the 1920s. The then completed Pergamon was also badly damaged at the end of WWII (though fortunately its contents escaped damage).
2. Berlin TV Tower
Berliner Fernsehturm, also known as the Berlin TV Tower, was constructed in the 60s by the administration of the German Democratic Republic (GDR). Standing at 368 meters-high, it's the tallest structure in Germany and easily visible throughout most of Berlin.
3. Neues Museum
The Neues Museum reopened in 2009, after extensive renovations. Since then, it has attracted more than a million visitors per year. It houses two major collections.
4. Neue Nationalgalerie
The Neue Nationalgalerie at the Berlin Kulturforum is a world-class architectural icon from the mind of Ludwig Mies van der Rohe (1886–1969), built to house 20th-century art. A major refurbishment was carried out during the late 2010s to bring the ‘60s-era building up to modern standards. The column-free “universal space” is a classic of modernism and serves as the perfect location for works from European and North American masters like Edvard Munch, Pablo Picasso, Max Ernst, Salvador Dalí, Francis Bacon, and Andy Warhol, amongst many others. Some of the museum’s most famous works are Potsdamer Platz by Ernst Ludwig Kirchner, The Skat Players by Otto Dix, and Who’s Afraid of Red, Yellow and Blue IV by Barnett Newman. A rotating calendar of special exhibitions also takes place in the Neue Nationalgalerie, so keep an eye out for their latest offerings.
5. BODY WORLDS Berlin
The Berlin chapter of the international science exhibition sensation BODY WORLDS takes you on a voyage of discovery beneath the surface of the skin. The aim of the exhibition is to give visitors an understanding of what the human body's inner workings can tell us about ourselves and our lives, and how under the skin, people of all cultures and ethnicities are fundamentally the same.

Combine Berlin favorites. Some things are better together.

Phantoms of the Night - 100 Years of Nosferatu

Monica Bonvicini. I do You

The Worlds of Schliemann

The Worlds of Schliemann

Palm-Sized Art: Medallic Art in Germany from 2007 to the Present

New Acquisitions for the Nationalgalerie’s Collection

Fragments of Life: A Ukrainian Diary

Cameron Clayborn: Nothing Left to Be

Adventures on the Nile

Quantity and Quality: The World of Greek Terracottas

We Are From Here. Turkish-German Life in 1990 - Photographs by Ergun Çağatay

The Art of Society 1900–1945: The Nationalgalerie Collection

ALL HANDS ON: Basketry

The Neue Nationalgalerie: Its Architect and Its Building History

The Crown of Kerch - Treasures from the Dawn of European History

All things to do in Berlin

Illuseum Berlin is a family-friendly museum of beguiling optical illusions, sense-defying physics exhibits, and interactive trickery all rooted in science. It is located in the center of Berlin – or is it?
Berlin

The Alte Nationalgalerie is an art gallery located in Berlin, Germany. It can be found in the UNESCO recognized Museum Island complex, and showcases a beautiful collection of Neoclassical, Romantic, and Impressionist artwork.
Berlin

The Lighthouse of Digital Art | Berlin

Visit the Lighthouse of Digital Art, a museum of digital and new media art in Berlin, and experience our current exhibition as well as the AI Gallery and our Infinity Room. Enjoy a 45-minute multidimensional journey in a uniquely immersive space. Visit a room full of mirrors and LED lights - full of reflections, full of light and with yourself. And discover a small gallery where we present you a selection of seven different themes we've created over the last few months using various AI tools.
Berlin

The Gemäldegalerie is an art gallery located close to the south-east corner of the Großer Tiergarten in Berlin. The museum houses the major works of the Berlin State Museums, including a number of masterpieces from the 13th-18th centuries by German masters. The nearest station is U Potsdamer Platz.
Berlin

Berlin Icebar is a bar and visitor attraction offering beverages in sub-zero temperatures. Everything in the bar is crafted from ice, including the furniture, walls, and glasses.
Berlin

SEA LIFE Berlin is a large underwater world that's home to 5,000 marine creatures. Visitors can learn all about the world's ocean dwellers and their habits, plus find out what's on the menu during fascinating feeding demonstrations. Berlin's SEA LIFE is centrally located and can be reached by taking public transport to Alexanderplatz.
Berlin

Yadegar Asisi's remarkable Panorama returns to Museum Island, new and improved after its lauded initial run back in 2011. Visitors to the Pergamon Museum's temporary exhibition hall are transported back to 129 AD, enveloped by a panoramic reconstruction of Pergamon during the time of Emperor Hadrian. As you wander an ancient metropolis, some of the most important works in the museum's collection are on show, making for one of the most unique cultural experiences around.
Berlin

The Feuerle Collection is a non-profit institution in Berlin Kreuzberg, founded by Désiré Feuerle and Sara Puig in 2016, dedicated to Désiré Feuerle's collection. On display are 7th - 13th-century Khmer sculptures in stone, bronze and wood, Imperial Chinese lacquer and stone furniture, scholar's furniture ranging from the Han Dynasty to the Qing Dynasty, from 200 BC to the 18th century, juxtaposed with works by Cristina Iglesias, Anish Kapoor, Zeng Fanzhi, James Lee Byars, Nobuyoshi Araki and Adam Fuss. The exhibition is located in a former World War II telecommunications bunker renovated by British architect John Pawson. It encourages a dialogue of different ages and cultures while providing a new perspective on early art.
Berlin

LEGOLAND® Discovery Centre Berlin has LEGO as far as the eye can see – the place contains over 5 million separate pieces of the colorful bricks! Made for those of us between the ages of 3 to 10 years old, everything is built on the small side, perfect for kids (but of course, this doesn't exclude taller and older LEGO fans from enjoying themselves, too, when accompanying their little humans). Berlin's LEGOLAND Discovery Centre is the ultimate playground, with more than 5 million bricks plus rides and attractions.
Berlin

This highly interactive museum lets visitors feel what it was like to live behind the wall - in the DDR (Deutsche Demokratische Republik). It chronicles, via video and film, daily life as it was under Communism. The museum also includes hundreds of ways to help you experience life behind the iron curtain, including watching East German TV shows, being 'bugged', voting in a (rigged) election and taking a (simulated) car ride in an iconic Trabi.
Berlin

The Friedrichstadt-Palast is a revue in Berlin's Mitte district, which regularly hosts spectacular theater productions. The Palast is by far the number one theater in Berlin - as well as the largest. Its stage floor covers 2,854 square meters and has seen ballet, acrobatics, dancing and international performers from all over the world. Watching a show here is a dream-like experience that's highly recommended.
Berlin

Reichstag Tour with Visit to the Building

Visit the political heart of the German capital!

Currywurst, cathedrals and culture - see the best of Berlin from the Spree!

Explore Berlin from a double-decker bus

Explore over 115 highlights and the very best of Berlin

Berlin public transport is relatively easy to navigate, with tickets valid across the U-Bahn, S-Bahn, trams and regional trains. The city is quite spread out, so you’ll be glad to have some transport to help get you from A to B. There are no ticket barriers for the metro, with residents and tourists using the honor system, but better not to risk a fine. If you’re planning three or more journeys in one day, a Day Ticket (Tageskarte) is a smart move.

When the sun shines on Berlin, a walk along the river can make you feel like you’re in the best city on earth. April to June are good months to visit, with the weather generally staying drier than in other parts of Germany. July and August can get quite hot, so if you’re planning lots of walking, try April or leave it till mid September when the crowds are more bearable too. If you’re a festival-buff, there’s always a lot happening in June.

Schnitzels and pretzels and beers, oh my! From steins to Michelin stars, Berlin is a city that provides its hungry patrons anything and everything they desire. But if it’s a hot dog you crave, (and who doesn’t?) you’re in the right place. Check out the currywurst - a dog with a ketchup/curry sauce that’s like no other. Another thing to try is “senfeier,” - hard-boiled eggs with mashed spuds, covered in a creamy mustard sauce. Just as yummy, we promise.

What to do in Berlin for 3 days 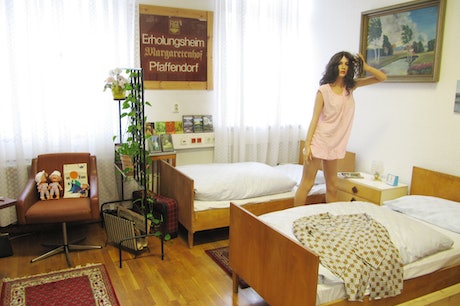 Step back in time at the DDR Museum

The former communist state might be different in 2019, but you can see exactly what it was like during those 40 years of DDR rule in this museum, which is also a house. Twice nominated as the European Museum of the Year, this incredible taster of the past lets you rummage through cupboards and drawers, be interrogated by the Stasi, get an insight into life in Socialist Germany, and appreciate your freedom like never before. You’ll even exit through a piece of the Berlin Wall. 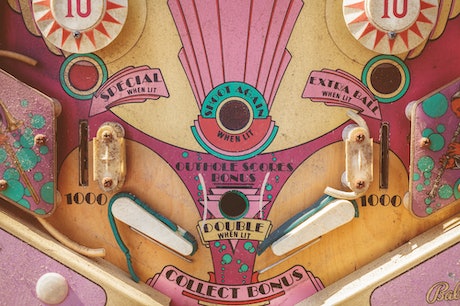 Ever wanted to try your hand at classics like The Pong-Machine, the Giant Joystick, Donkey Kong, Asteroids and Space Invaders? Of course you have, and you can get as hands-on as you want at Berlin's Computerspielemuseum. Learn the history of games and their creators, tour with Lara Croft, meet Nimrod, witness working originals and say wow at over 300 games and computer-related items. The famous PainStation gives electric shocks when you mess up. Go on, I know you’re curious! 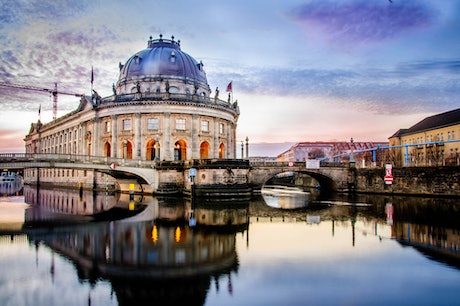 This UNESCO-listed World Heritage site in the middle of the Spree boasts some of Berlin’s most important museums, including the Neues Museum, proud home of an Ancient Egyptian bust of Nefertiti, and also the Pergamonmuseum, one of the world’s most important and impressive archaeological collections. The other half of Museum Island has a swimming pool, library and other everyday treasures. Make like a real Berliner and spend the day taking in the sights here in this central spot. 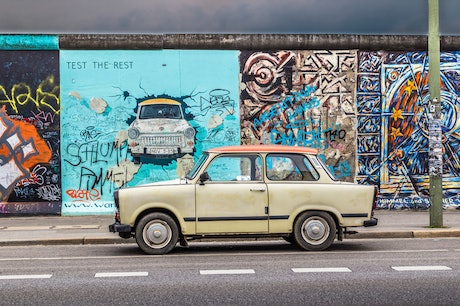 Demolished to the sounds of joy between June and November 1990, the Berlin Wall stood for a lot before it was knocked down. You can learn all about it on a restored stretch, which spans the southern border of Wedding and Mitte. At Checkpoint Charlie you’ll see what east-west border control was like during the Cold War - if you can picture it around the tourists. For more, walk along the Spree to the one-mile stretch known as the East Side Gallery.

Best places to visit in Germany