See the famous residence of the British royal family, where princes were raised 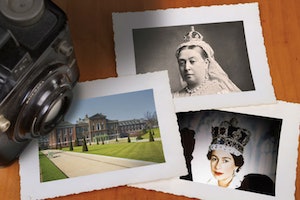 Take a peek inside the private life of the royal family as Kensington Palace presents, for the first time, a collection of the family's personal photos.

Not only will visitors learn about how photography helped the public get closer to the royal family and the way it influenced their perception, but it also offers the chance to see some of the earliest photos taken of the monarchy.

The exhibit's display highlights the work of Cecil Beaton (the photographer behind iconic shots of Marilyn Monroe and Audrey Hepburn) and Norman Parkinson.

An actual royal palace - it's where Prince William lives with the Duchess of Cambridge and their kids. Though you probably won't bump into them in the hallway, it's still a fascinating window into the lives of royals past and present.

London's Kensington Palace has been a royal residence for over 300 years. At Queen Victoria's behest, the State Rooms were opened to the public in 1899, on her 80th birthday. Since then it's been both a private residence for the royal family and a public museum.

Head up the magnificent Grand Staircase, visit the King's State Apartments, and the King's Gallery. The beautifully ornate Cupola Room and the Drawing Room will make you feel like you're among royalty (which, of course, you are).

Afterwards, swing through the Palace Gardens. Wander the shady Cradle Walk and look out upon the ornamental flowers in the Sunken Garden. It's a great opportunity to practice your royal wave.

Queen Victoria was born in the palace and met her eventual husband, Albert, there. It was only when she was crowned that she finally moved into Buckingham Palace.

Print your smartphone ticket and show it at the admissions office of Kensington Palace.

At the same venue

This ticket includes a single entrance to the venue, in combination with other services. You can find this information under the section 'What's included' on this page.
Discounts for different age groups vary per product. You can find discount related information while selecting your tickets in the checkout. When choosing your tickets, check for ticket types with discounted prices. For example, some products have a ticket type 'Child', which is specifically for children. Remember to bring a valid ID to the venue if you've purchased a discounted ticket.
We support popular payment methods used across the globe, notably Visa, Mastercard, Paypal, Alipay and iDeal. Some payment options are specific to the language and currency combination you use when ordering tickets.
Yes, you do have to print your tickets. See the section titled 'Instructions' on the product page for more information on this.

Though most famous for the imprisonments and beheadings held there it has, at various times, served as the royal residence, mint, menagerie, armory, observatory and as the holding place for the Crown Jewels - a function it still serves. Legend has it that six ravens must guard the tower at all times, or else the kingdom (as in United Kingdom) will fall. The ravens are still there, and so is this nearly thousand year old complex of stocky stone structures.
4.8 / 5 (1317)
From
$32.61
London

Kew Palace was initially bought by George III as a palace for the royal children. Many princes and princesses have been raised here. Later, it was put into use as a summer residence for the British Royals. The huge botanical gardens that lie around it occupy a whopping 121 hectares and have been on UNESCO's World Heritage List since 2003. The abundant flora and fauna will make you forget that you're in the London metropolis!
4.8 / 5 (3095)
From
$6.52
Windsor

Sprawling Windsor Castle has 1000 years behind it as a royal residence and visitors can explore the Royal Collection of artwork, the opulent State Rooms, St George's Chapel and more. It's located in the English county of Berkshire and is easy to reach by car or by train from London Waterloo or London Paddington.
4.8 / 5 (853)
From
$19.57