Top 5 things to do in Dublin

1. EPIC The Irish Emigration Museum
EPIC The Irish Emigration Museum is situated in the lively Custom House Quarter building in Dublin's port district. The museum brings Ireland's fascinating history to life with immersive and interactive exhibits, video galleries, motion sensor quizzes, remastered archival material from 100 years ago, and more. EPIC is dedicated to the far-reaching influence of Irish emigration, and the impact of the 10 million Irish men and women who left Ireland for foreign shores.
2. Irish Whiskey Museum
The nectar of life is all around you at one of Dublin's top attractions - the Irish Whiskey Museum. Here's where to come for a full lowdown on whiskey's history and to see some very cool whiskey memorabilia from the 1800s. The Irish Whiskey Museum is located right in the heart of Dublin, by Trinity College.
3. The National Wax Museum Plus
The National Wax Museum Plus is right in the middle of Dublin, just a two minute walk from Trinity College, and close to other highlights like Dublin Castle and Temple Bar. Here's where stars of the present - like Liam Neeson and U2 - rub waxy shoulders with greats of the past - including Samuel Beckett and James Joyce. There are other fun features as well, including a green screen video studio, a chamber of horrors, and the Kid's World area.
4. Saint Patrick's Cathedral
Founded back in 1220, Saint Patrick's Cathedral in Dublin is the National Cathedral of the Church of Ireland. It's also the tallest church in Ireland, boasting a 43-metre spire and some pretty impressive Gothic architecture. A well on the grounds of the cathedral is said to have been used by St. Patrick himself to baptize Ireland's pagan population into Christianity. The grounds are also the burial site of the Anglo-Irish writer of Gulliver's Travels, Jonathan Swift. Today, the cathedral is one of Dublin's must-see landmarks for visitors to the Fair City.
5. Game of Thrones Studio Tour
Located at the authentic filming location of Linen Mill Studios in Banbridge, Northern Ireland, the Game of Thrones Studio Tour welcomes visitors into the Seven Kingdoms and beyond to explore the making of all eight seasons of HBO’s global hit series. Step onto original sets, including the iconic Great Hall at Winterfell where Jon Snow was proclaimed the “King in the North,” and view genuine set pieces including Daenerys Targaryen’s imposing Dragonstone throne. See first-hand the intricate detail of the costumes, weapons and props imagined by award-winning designers and artisans and encounter interactive elements to relive some of the most memorable scenes from the show. Covering over 10,000 m2, this world-class attraction invites you to peek behind the scenes to discover all the elements that went into bringing the epic world of Game of Thrones to life.

Combine Dublin favorites. Some things are better together.

All things to do in Dublin

This is the original Jameson Distillery Bow St., where distiller John Jameson first set up shop in 1780. Over 230 years and a major renovation later, it now hosts fun and fascinating experiences such as premium whiskey tasting, whiskey-blending lessons, and cocktail-crafting classes.
Dublin

The GPO Museum is located inside the General Post Office on Dublin's O’Connell Street. This grand building, designed by Francis Johnston in 1814, is easy to reach by Dublin Bus, as well as via Bus Éireann and other national bus companies. It's also a three-minute walk from the Abbey Street stop on the Luas Red Line.
Dublin

From U2 to Enya and beyond, Ireland has made its mark on the music industry. At The Irish Rock 'n' Roll Museum Experience you'll get to load up on the history of the music scene in an iconic building in the center of the city. Who knows who you might find recording, or hanging out in the rehearsal rooms at this fully functional studio? It's only 5 minutes from Trinity College Dublin and easily accessible via public transport to Dublin’s famous Temple Bar. Rock on!
Dublin

Built around 1028, Christ Church is Dublin’s premier cathedral. Remarkably, this medieval structure is the nominal seat of both the Anglican (Church of Ireland) and Roman Catholic archbishops of Dublin. It's also one of two medieval cathedrals in the same city.
Dublin

St. Andrew's Church (also known as The Old Stone Church) on Suffolk Street is the departure point for the Cliffs of Moher Day Tour. It's easy to find, with or without looking for the statue of Molly Malone, which stands outside. Suffolk Street is easy to locate in central Dublin, close to many bars, restaurants, shops and other attractions.
Dublin

If you like a little tipple on a day trip, here's a destination for the Dublin list. The Teeling Whiskey Distillery, right in the heart of the city centre is the perfect place for anyone interested in Dublin's association – or, more accurately, obsession – with Irish whiskey. The Bang Bang Bar has great views over the city, and the on-site café has delicious food to help soak up all that booze.
Dublin

Windmill Lane Recording Studios is one of Ireland's most iconic music recording studios. Opened in 1978 in Dublin, the studio has been used by some of the world's biggest artists and bands, including The Rolling Stones, Kate Bush, The Cranberries, U2, Hozier, Van Morrison, Sinead O’Connor, Metallica, Def Leppard, Lady Gaga, and many others. Still a fully operational recording studio, Windmill Lane now also offers tours of its hallowed halls, where visitors can discover the history of the studio, learn about the recording and music production process, and even mix their own session with the help of expert producers and sound engineers.
Dublin

MoLI is the museum of literature for the world’s greatest storytellers. Inside the University College Dublin Newman House location on St Stephen's Green, you can discover Ireland’s rich literary heritage from past to present. There's immersive exhibitions, treasures from the National Library of Ireland, and a tranquil gardens and a café to relax in.
Dublin

The Little Museum of Dublin is a gem in the heart of the city. Its friendly staff are passionate about regaling the stories of Dublin's past, as well as being both handsome and witty in equal measure! Through over 5,000 artefacts, kindly donated by the good folk of Ireland, the museum tells the story of Dublin's last 1,000 years. Take a self-guided gander, or try to catch one of the much-loved guided tours for a fun and fascinating history lesson.
Dublin

The Guinness Storehouse is Dublin's number one tourist attraction and the perfect pit-stop for any beer fan! It's located at St. James's Gate, Dublin, Ireland. Learn about the history of the Guinness, enjoy the brewery experience, and sample everything there is to know about Ireland's famous beer. There are even tastings and a rooftop bar with stunning city views. What great craic!
Dublin

Pearse Lyons Distillery at St. James is an Irish whiskey distillery. Its founder, Pearse Lyons, held a PhD in yeast fermentation, and was the first Irishman to receive a formal degree in brewing and distilling from the British School of Malting and Brewing.
Dublin

Based on the famous traditional Irish song of the same name (also known as Cockles and Mussels), the Molly Malone Statue is a bronze statue and popular sightseeing landmark in Dublin, Ireland. Located outside the tourist information office on Suffolk Street, the statue is often seen striking poses with visitors to the Fair City. Due to the large amounts of tourists who stop to take photos with the statue, many of whom get a little bit too touchy-feely, the bronze has actually started to tarnish around certain areas of the statue.

Your ticket to Dublin’s most popular attractions, sights and landmarks

One bus, the whole of Dublin at your fingertips

Experience the fascinating and ancient Book of Kells, and more!

Although it’s slowly improving, Dublin’s public transport is far from great. Weather allowing, you’re always better off walking to your destination. If it's pouring rain, buy a Leap Card in a convenience store, top it up, and don't forget to tag on and tag off when entering/exiting the bus/tram. The hop-on hop-off tour comes in handy too, as you don’t have to worry about directions. One of the three routes offered is bound to take you where you want to be and, with audio commentary in eight languages, it’ll be tough to miss your stop.

The Irish are such warm, lovely people that they don’t welcome you once, but a hundred thousand times (or céad míle fáilte in Irish Gaelic). Be it directions when you’re looking completely lost, a friendly reminder from the bus driver so you don’t miss your stop or a free pint and a chat in the pub, you can certainly count on the Irish for a helping hand. Just make sure that the charming stranger who provided you with that free pint isn’t, in fact, expecting you to pick up the next round.

Guess what? The stereotype is true: it does rain a lot here, so much that the Irish have as many words for rain as they have for different levels of drunkenness. The silver lining is that you’ll see (and photograph) more rainbows in a couple of days than your Facebook friends can handle. A good rain jacket and a pair of comfortable boots are essential, from January to December. If you’re braving the Irish winter, bring a warm sweater, a scarf and gloves too. Umbrellas are mostly useless against the local wind, so don’t bother.

What to do in Dublin for 3 days 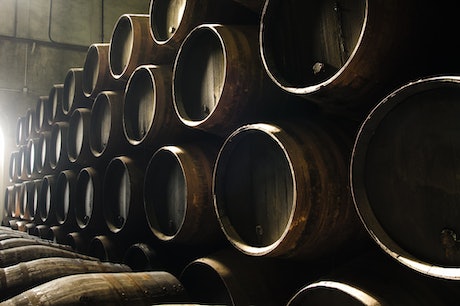 Dublin is a fairly small city, but it does punch above its weight when it comes to culture. As well as a plethora of quality national museums and galleries, it has gems like the Irish Whiskey Museum, where energetic guides and generous tastings will teach you ‘loads, like’. Looking for a more solemn experience? The fascinating Glasnevin Cemetery will make you reimagine what a cemetery can be. Looking for more fun? Tune your musical knowledge at the Irish Rock ‘n’ Roll Museum Experience. 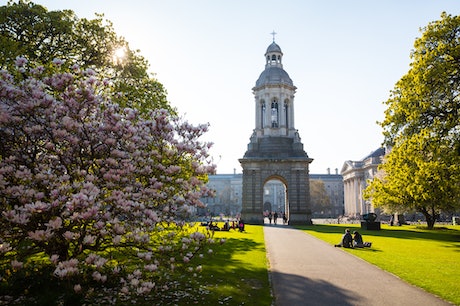 The Irish love a park and they’re quite good at designing cozy ones. If you’re looking for something lively, St. Stephen’s Green is the place to go. Walk around it before choosing a spot where to settle and you might find the statue of Oscar Wilde, who lived nearby for over 20 years. There are quieter parks in Dublin too - including Merrion Square, where you can enjoy a food market on Thursdays, and the Iveagh Gardens, which only gets busy during the annual Comedy Festival. 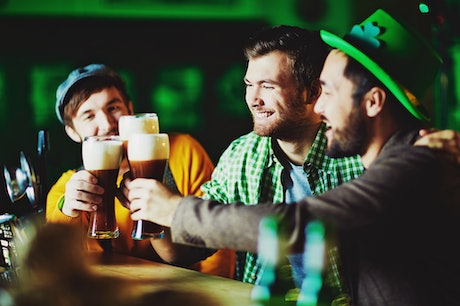 Life revolves around pubs in Ireland, from celebrating the birth of a baby to the mourning of a loved one, a ceremony known as wake. There are so many pubs in Dublin that James Joyce included the following in his epic Ulysses: “Good puzzle would be cross Dublin without passing a pub”. Although a software developer solved that back in 2011, your best bet is to embrace the fact that you’ll never be too far from a good drinkery and all of the possibilities that come with it. 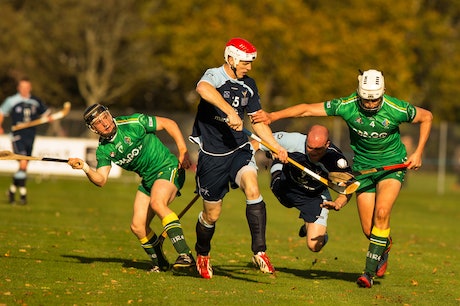 Although they’re more famous for their rugby and, occasionally, for their football, the Irish have two games of their own: hurling and Gaelic football. Both are great fun to watch and you should definitely give it a go if there’s a match on during your stay. If not, you can still take the Croke Park Stadium Tour and visit the state-of-the-art GAA Museum. There you’ll learn about this historic arena and get to know what exactly the Gaelic games are about. Teaser: the sliotar, aka the ball used in hurling, travels at up to 150 km/h when hurled.

Best places to visit in Ireland