10 Buildings in Rotterdam with the Wow-Factor

It could be Rotterdam or anywhere, as the song suggests, although anyone who’s visited Rotterdam’s modern urban sprawl of skyscrapers, high-rises and towering architectural wonders knows it’s a city unlike any other. If you’re heading to the Netherlands for the Eurovision Song Contest 2021, let us help you find the top 10 striking structures and buildings in Rotterdam while you’re at it. They might stay with you longer than the songs!

Can you believe people actually live in these things? The eye-catching cube-shaped buildings stacked behind the Oude Haven waterfront were designed by Dutch architect Piet Blom, who planned the facades to tilt 45 degrees on their sides. His aim was to optimise living space inside, and handily, the world outside was optimised at the same time. The Cube Houses also form a pedestrian bridge across one of Rotterdam’s busiest streets.

Considered some of the most striking examples of modern architecture in Rotterdam, the Cube Houses were designed in the late 1970s to symbolise a forest, with each stand-alone cube representing one tree. (It’s a stretch, but we’re going with it.)

There’s a small museum inside one cube – the Show Cube Museum (Kijk-Kubus) – which you can visit for more information, and maybe even inspiration. Regular houses seem so dull now, right?

Want to test it out? Stay in a Rotterdam Cube House on Airbnb.

Winner of many architectural awards since its completion in 2006, the mighty Maastoren is the king of all Rotterdam skyscrapers. It’s also currently the tallest building in the Netherlands, stretching 165 meters into the sky.

Few would argue that its majesty makes it one of the most beautiful modern buildings in the entire Benelux region. If you’re heading out of the city via the Erasmus Bridge, you can’t miss the Maastoren piercing the clouds on your left.

With ten floors of parking spaces, there’s always somewhere for Deloitte employees to park their cars. Their headquarters are located on the lower levels so if you’re single and looking to bag a financial advisor, you know where to go. Interestingly, one side of the Maastoren is constructed in the river Meuse, and the jetties around it are a key factor in stopping passing ships from butting in.

Its title sounds like something from Game of Thrones: Maeslantkering, storm barrier and protector of Rotterdam. Truly a standout when it comes to architecture in Rotterdam, this monstrous beast of a storm surge barrier comprises two halves, one on each side of the waterway that connects Rotterdam to the North Sea.

Rotterdam modern architecture like this is an inspiration; protecting the city from flooding while leaving Europe’s biggest port easily accessible for ocean-bound traffic.

It’s pretty cool to witness the world’s largest ball joints shuffling the floating halves together, allowing water to flow through the hollow channels of the gates. There’s no underwater maintenance needed here, and should a storm dare to approach, there’s no way it’s getting in!

Hungry? There’s only one place you should head for food in Rotterdam. Designed by leading Dutch architectural firm MVRDV, the humongous food mecca that is Markthal Rotterdam is right next to the Cube Houses. The delicious smells aren’t the only reason why you can’t miss it – this sustainably built market hall takes the shape of an upside-down horseshoe!

Inside the Markthal’s arches are hundreds of apartments and offices. And showing that no inch should go to waste, there’s even a supermarket and a car park down in the basement.

Look up at the ceiling, and you can see this building’s true colours – literally. The Markthal is home to one of the largest artworks in the world – Hoorn des Overvloeds (Horn of Plenty) – which covers the entire roof’s interior! Spanning an area of 11,000 square metres, this impressive work of art has been equated to the Sistine Chapel. Sounds far-fetched, but just wait until you see it.

In light of an upcoming modern apartment complex, the futuristic-looking Pauluskerk was constructed in 2013 to replace the original Pauluskerk (Church of Paul) from the 1960s. Looking more like a spaceman’s helmet, the jutting angles and odd-shaped windows create a unique piece of architecture in Rotterdam that pretty much demands you stop and take a photo!

Don’t be fooled by its pretty face, however. With this church, it’s really what’s inside that counts. Stretching beyond its purpose as a nondenominational church, it also acts as a community service centre.

The Diaconal Center Pauluskerk supports all people from Rotterdam and the surrounding areas, who can’t survive without help. This includes addicts, psychiatric patients, the unemployed, the elderly and the homeless.

It looks pretty too – the outside of the building is covered in mirrors, which reflect Rotterdam’s city center, and the rooftop promises a lush garden of bird and bee-friendly fauna.

Inside Depot Boijmans you won’t find any exhibitions, but you will be able to browse among 70,000 artworks, independently or with a guide. Some of them are guaranteed to have never been seen in public before, seeing as the museum as it is can only display 8% of the collection at once!

Excitingly, you can also handle some of the artworks, as well as watch demos from the staff on how they preserve and restore precious pieces.

Probably one of the most famous pre-war buildings in Rotterdam, The Witte Huis was built in 1898 by architect Willem Molenbroek with an emphasis on Art-Nouveau techniques. It stands alone and is well worth a look, as most of Rotterdam’s historic city centre was destroyed by devastating airstrikes in World War II.

The 43-metre-tall Witte Huis (White House) also has the claim to fame of being Europe’s first ever skyscraper! It might look tiny now, compared to others like De Rotterdam, but at the time of construction, it was a pretty big deal for Rotterdam’s modern architecture. Located on the river in Rotterdam’s Maritime District, the views from the rooftop viewing platform are still some of the best in the city.

Based on American architecture back in the day, this once-modern office block was designed with strikingly white glazed bricks. Its attractive, elegant, almost fairytale-like features, including turrets, mosaics and stone sculptures all contributed to it becoming a National Heritage Site.

Now a UNESCO World Heritage Site, the former Van Nelle Fabriek (Van Nelle Factory) is closed for business, but it remains a great example of 1920s industrial architecture in Rotterdam. This huge building complex comprises several factories, which were once packed with bustling production lines, sending out goods like tobacco, tea and coffee.

TOP TIP: If you’re out and about in Rotterdam, make sure you locate a Van Nelle coffee –  it’s still one of the Dutch’s favourite brands.

The Van Nelle Fabriek isn’t just an awesome building. It was also one of the best places to work in The Netherlands. Built with the comfort of its employees in mind,  the entire space boasted healthy, steady airflow inside, huge windows to encourage maximum daylight, and landscaped gardens for blissful coffee breaks. If only 21st-century factories were all designed this way!

Who needs a Maps app when you have smart buildings like Rotterdam Central Station? The outer canopy and roof here forms a handy V-shape, with the tip pointing straight to the city centre!

Before it was unveiled in 2014, the old station had to undergo an intense makeover, which turned into a 7-year redevelopment project. The state-of-the-art terminal is now one of the main national and international transport hubs in the Netherlands.

You can still see a few of the original features inside, such as the giant clock, which are a nice contrast to the newer, contemporary materials. Can you spot the almost-transparent solar panels? It might be steel-clad for the most part, giving it a modern, cool vibe, but there’s warmth and atmosphere inside thanks to wooden surfaces, and an exciting, welcoming vibe.

This may well be your first stop in Rotterdam if you arrive by train, but take a moment at the station to appreciate some of the city’s best modern architecture.

Last on the list, but by no means least, is the iconic Erasmus Bridge, named after the famous Renaissance philosopher and Rotterdam native Desiderius Erasmus, and designed by Ben van Berkel. The 800-meter-long Erasmus Bridge is 139 metres tall at its highest point, and steals the skyline, providing a pathway across the River Nieuwe Maas from the northern to the southern areas of Rotterdam.

Unveiled in 1996 by Queen Beatrix, the bridge caused quite a stir thanks to its controversial shape. If you look closely you might spot a shapely woman’s leg in the angled pylon. Others insist it’s a swan, but feel free to make your own mind up.

The Erasmus Bridge is illuminated at night, which is quite a sight to see, and you’ll also be looking at Europe’s largest drawbridge!

TOP TIP: Take a Rotterdam Harbour Cruise to get the best photos of Erasmus Bridge.

Hopefully you’re inspired to see more modern, old and iconic buildings in Rotterdam during your sightseeing adventures. If you need more inspiration, check out some more things to do in Rotterdam, from stadium tours to mini golf, bike rentals and hop on, hop off bus tickets. 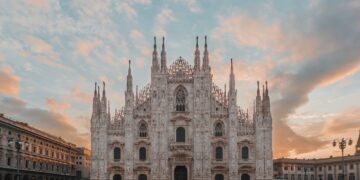 Spending One Day in Milan? Here’s What To Do With It 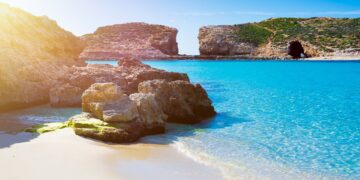 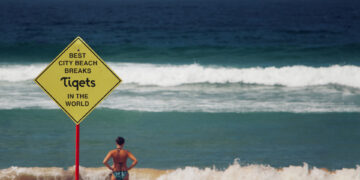 The Best City Beach Breaks in the World 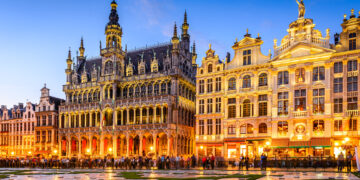