Top 5 things to do in The Hague

#1
Madurodam
See exact replicas of special buildings and objects, on a scale of 1:25 at The Hague's Madurodam. It's a great place to get educated on all things Dutch, and an even better place to experience what the BFG feels like daily.
#2
SEA LIFE Scheveningen
SEA LIFE Scheveningen is a family-friendly oceanic attraction that lets visitors experience the hidden wonders of our seas and attend animal feedings. Its dedicated staff are passionate about conservation. SEA LIFE Scheveningen is located in The Hague and is easy to reach by train, tram, bus or car.
#3
Escher Museum
Escher in Het Paleis / Escher in The Palace is located in The Hague's impressive former Winter Palace of the Queen Mother Emma. It makes for a day of optical illusions in some fairy tale surroundings. The Palace is easily reached by all trams to the Malieveld tram station.
#4
The Louwman Museum
The Louwman Museum is home to the world’s oldest private collection of motor vehicles, featuring more than 250 antique and classic cars. Explore it all in this great museum located in the Hague.
#5
The Hague Public Transport Museum
The Hague Public Transport Museum is a journey through time, exploring how people used to travel by public transport in The Hague. The museum is located inside an old tram depot, making it extra authentic, and tells the story of the past, present and future of public transport in The Hague. Visitors can enter a permanent exhibition and also walk around a large collection of historical trams.

More ways to experience The Hague

Rent a private, vintage tram to yourself and take a tour through The Hague
From $297.20
New on Tiqets

All things to do in The Hague

One of the few elite Dutch art museums outside of Amsterdam, the Mauritshuis is located in a 17th-century mansion in the Hague. Its permanent collection, the Royal Cabinet of Paintings, consists of 854 works from Dutch and Flemish masters from the 17th century, which is often known as the Golden Age of Dutch art. Among its most prized works is one of the world's most instantly recognizable and reproduced paintings: Johannes Vermeer's timeless 'Girl with a Pearl Earring'. It also features the whos-who of Dutch and Flemish masters, with works by Rembrandt, Van Dyke, Rubens, Brueghel, Holbein, Hals, and Steen all represented in the immense collection. The Mauritshuis is one of the most essential art experiences in the Netherlands and an absolute must-see in the Hague.
5.0 / 5 (9)
From
$18.80
The Hague

Dedicated entirely to recreating the unbridled thrill of driving a Formula 1 race car with state-of-the-art virtual reality technology, VRF1 is a fast and furious gaming attraction in The Hague that puts your need for speed in the driver's seat. This hyper-realistic racing simulation combines cutting-edge graphics and true-to-life car handling physics with everything from the feeling of wind in your face to the rumble of the engine. It's an immersive multisensory experience that Formula 1 fanatics and anyone who appreciates life in the fast lane should race towards!
5.0 / 5 (1)
From
$42.46
The Hague

The Louwman Museum is home to the world’s oldest private collection of motor vehicles, featuring more than 250 antique and classic cars. Explore it all in this great museum located in the Hague.
4.9 / 5 (62)
From
$19.41
up to —10%
The Hague

See exact replicas of special buildings and objects, on a scale of 1:25 at The Hague's Madurodam. It's a great place to get educated on all things Dutch, and an even better place to experience what the BFG feels like daily.
4.7 / 5 (261)
From
$21.23
The Hague

Escher in Het Paleis / Escher in The Palace is located in The Hague's impressive former Winter Palace of the Queen Mother Emma. It makes for a day of optical illusions in some fairy tale surroundings. The Palace is easily reached by all trams to the Malieveld tram station.
4.7 / 5 (105)
From
$13.34
The Hague

One of the premier art museums in the world, the Kunstmuseum's Art Deco walls are lined with countless works by Mondrian, Monet, Picasso, Degas and more!
4.7 / 5 (24)
From
$19.41

Planning your The Hague visit

Getting around the Hague

Like most Dutch cities, the bicycle reigns supreme here. The Hague offers dedicated cycle paths, areas for locking up bikes, plenty of bikes for hire and a host of good repair shops. If you’re driving you’ll have to pay for on-street parking in most parts of the city, but taxis or Uber will save you the hassle. The Hague boasts an excellent public transport system too. There are more than 30 bus and tramlines to bring you from Point A to Point B and back again. Make like the locals do and download the 9292 public transport planner app to help you get around.

Judicial Capital of the World

The Hague is the center of all that’s ‘official’ in the Netherlands (the institutions of Dutch government, two official homes of the Dutch Royal family, lots of embassies). However, it’s far from stuffy or boring. If anything, the international affairs that take place here, plus the regular presence of the King and Queen make it all the more charming. The International Court of Justice and the International Criminal Court add a formal tone to this wealthy city that boasts the most historical sites per mile in the country. And a host of very prosperous expats.

Nightlife in the Hague

Summer is a great time to be out at night in The Hague, when the bars along the Scheveningen Beach promenade are buzzing with booze-swigging locals and tourists, and everyone heads to the nightclubs and live music spots at De Zwarte Pad. If you’re seeking a more casual affair, Grote Markt is a decent spot to head in warm weather. The square is packed with tables and chairs all spilling out from restaurants and bars, while The Plein and the Buitenhof squares are equally alive. Whatever floats your boat for a bit of night time fun, you’ll find it in the Hague.

What to do in The Hague for 3 days 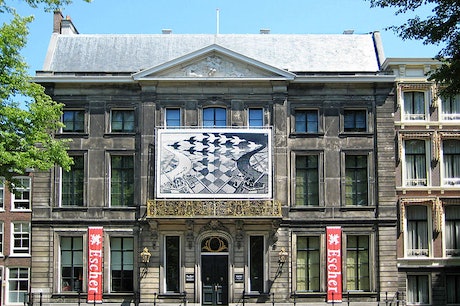 Explore the world of Escher in Het Paleis

Are the stairs going up or down? Are they even really there? M.C. Escher's mind-boggling work has confused people for years, and Escher in Het Paleis will blow your brain even more with a whole world of optical illusions. Check out the Impossible Penrose Triangle. Ponder over twisting towers, shark-shaped chandeliers, and endless staircases. You’ll freak yourself out over tiny grown-ups, infinity mirrors, and giant kids. Everything that’s wrong feels right at this museum dedicated to the country's most famous (and clearly tripped out) graphic artist. The world's second-largest flower garden delights locals, expats, and hoards of visiting foreigners every single year with over 7 million flowers in various exhibitions, rows, and glass houses. Every year, from late March to May, the so-called “Garden of Europe” invites visitors to walk these former 15th-century hunting grounds, breathing in the scent of 79 acres of tulips and an exotic Japanese garden. The park was founded in 1949 to display Dutch and European hybrids, and the best views are most definitely from the tops of the windmills. 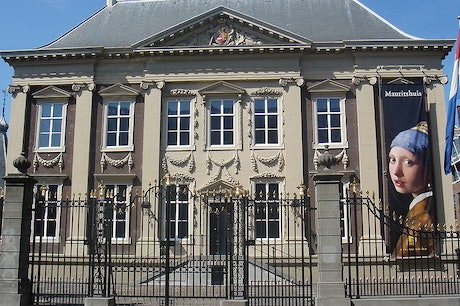 Revisit the Golden Age at Mauritshuis

Crammed into a 17th-century waterfront building is more famous art than you can shake a paintbrush at. Vermeer’s Girl with a Pearl Earring hangs here at Mauritshuis, and so do almost 900 objects from the Dutch Golden Age. Wander the halls and galleries and soak up priceless works from artists like Vermeer, Rembrandt, and Potter, and see why people all over the world looked to these Dutch artists for a more realistic representation of life in oils. Guided tours will talk you through the paintings, adding that all-important extra depth. 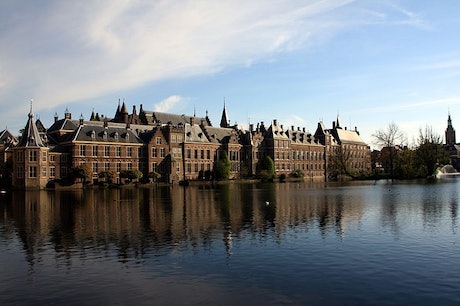 Get political at Binnenhof

Dutch counts sat in this 13th-century Gothic castle and talked politics, so it’s fitting that today it’s still a center of politics here. If you’re lucky you might even see the current parliament in session. The castle is home to both legislative houses and the office of the prime minister. Some parts of the building might be off-limits due to politics in action, but as the historic and current center of Dutch political life, a visit to Binnenhof makes an intriguing respite from the drizzle on a winter’s day, and stays fascinating all year round.

Best places to visit in The Netherlands