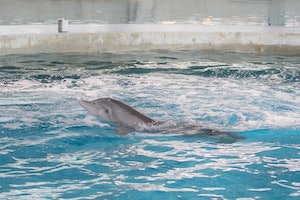 Despite being something of celebrity around these parts, Winter the Dolphin had to wait a long-old time for her new habitat. Star of the Dolphin Tale movies, Winter's old digs were getting a little cramped for her and her rescued friends.

After 14 years of planning and discussions, the dolphins of Clearwater Marine Aquarium recently moved into their 1.5 million gallon residence. With nine huge viewing windows, including a 40-foot-wide observation space, visitors can now stop by the dolphin pool, which provides a key resource in the CMA's mission to rescue, rehabilitate, and release some of the region's most valuable marine creatures.

How many celebrity dolphins have you met? Get ready to add a name to that list, with a ticket to Clearwater Marine Aquarium. A rescue center for marine wildlife, Clearwater Marine Aquarium is home to Winter, the prosthetic-tailed dolphin who played herself in the hit Hollywood movie Dolphin Tale. Get to see Winter and her friends, and learn about some amazing success stories of animal rescue, rehabilitation, and release.

After losing much of her tail in a tragic crab trap line tangle, Winter the dolphin was rescued by Clearwater Marine Aquarium, who nursed her back to health and even fitted her with a state-of-the-art prosthetic tail.

Her story inspired the film Dolphin Tale, which was filmed on location at Clearwater Marine Aquarium. Naturally, there was only ever one candidate for the movie's star role, and you'll get a fascinating front-row seat to her happy-ever-after.

Winter shares the stage with a host of other beautiful creatures, including sharks, otters, rays, eels, sea turtles, pelicans, and more. The emphasis is on educational wildlife encounters and animal welfare over cheap tricks, so real animals lovers can visit with a clear conscience.

It's the perfect family day out in the Sunshine State.

Show your smartphone voucher at the ticketing window on the third level to receive one entrance sticker per voucher. Please enter through the garage on the 3rd floor.

The Florida Aquarium is one of the USA's top aquariums, largely dedicated to conservation efforts. It offers visitors a glimpse into different marine habitats, thanks to a number of educational and interactive exhibits. It's located in downtown Tampa at Channelside, allowing visitors to make the most of the Channel District.
4.9 / 5 (113)
From
$28.00
Orlando

WonderWorks is a family-friendly theme park located on International Drive in Orlando, Florida. It features 35,000 sq ft of 'edutainment' across six different zones. It's easy to reach with a car. Parking is available at the Pointe Orlando parking garage.
4.5 / 5 (4)
From
$36.20
up to —10%
Tampa

ZooTampa at Lowry Park is an award-winning zoo and wildlife conservation center located in Tampa, Florida. Home to a diverse range of wild animals from around the globe, it features some of the world's rarest big cats, including the clouded leopard and Florida panther.
4.7 / 5 (35)
From
$35.95