Online saver: book in advance and save on your ticket to awesomeness 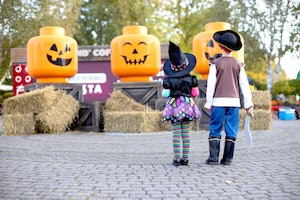 That toothy Lord Vampyre loves Halloween, and he's inviting little monsters across the land to celebrate his season at LEGOLAND® Windsor Resort. Pop in your plastic fangs, slap on some fake blood, and enjoy a horrifying host of activities as the park dons its Halloween best.

Brick or Treat veterans will know what to expect, with the classic array of LEGO-themed chills and thrills returning for another year, like the spooktacular Brick or Treat Trail, the creepy costume competition, the spine-tingling Haunted House Monster Party Ride, and some spectacular fireworks displays throughout the festivities.

There's also some brand-new surprises arriving in 2020 to keep you on your toes, like the friendly-yet-frightening Scarecrow, as well as the Haunted Lighthouse Halloween Show, a dazzling dance extravaganza that will leave everyone feeling like Frankenstein's monster – in stitches!

Expand the limits of your imagination in a colourful wonderland of fun and creativity at Legoland® Windsor, the UK's most visited theme park. Explore dozens of incredibly detailed themed areas that will keep the kids (and you) entertained for hours. From the mega-popular world of Ninjago to the Land of Vikings, Knights Kingdom, Pirate Shores, Kingdom of the Pharaohs, and more!

Train like a ninja in the ancient art of Spinjitsu at the Ninjago Training Camp, take an immersive multi-sensory ride on 4D Ninjago The Ride, and meet the original ninja – a total must for budding ninjas!

Cascade around the Vikings' River Splash and bump along with chainmail valour on The Dragon, a thrilling knight-themed journey full of twists, turns, and giant red dragons. Join the Pirate Falls Treasure Quest, and splash down the river to escape the dastardly pirates!

Explore Miniland, and marvel at amazing model scenes from Europe and the USA featuring nearly 40 million Lego bricks! Brave the deep blue sea at Atlantis Submarine Voyage, and take to the skies in a hot air balloon in Lego City, many more adventures await you!

Show your smartphone ticket at the turnstiles.

Kew Palace was initially bought by George III as a palace for the royal children. Many princes and princesses have been raised here. Later, it was put into use as a summer residence for the British Royals. The huge botanical gardens that lie around it occupy a whopping 121 hectares and have been on UNESCO's World Heritage List since 2003. The abundant flora and fauna will make you forget that you're in the London metropolis!
4.8 / 5 (3095)
From
$6.52
up to —9%
London

Though most famous for the imprisonments and beheadings held there it has, at various times, served as the royal residence, mint, menagerie, armory, observatory and as the holding place for the Crown Jewels - a function it still serves. Legend has it that six ravens must guard the tower at all times, or else the kingdom (as in United Kingdom) will fall. The ravens are still there, and so is this nearly thousand year old complex of stocky stone structures.
4.8 / 5 (1317)
From
$32.60
up to —50%
London

The View from the Shard

The 95-story Shard was designed by world renowned Italian architect Renzo Piano. This architectural marvel is the tallest building in the European Union, and its distinctive shape has redefined the London skyline. If you visit The View From The Shard, you'll get a breathtaking 360-degree view of London from more than 300 meters above the city.
4.8 / 5 (1349)
From
$19.56