The scariest attraction in the UK, hands down 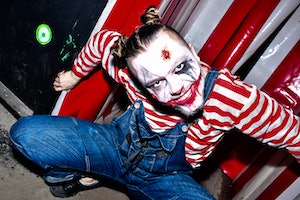 It's plenty scary all-year-round at the London Bridge Experience. But at Halloween, it's a full-on nightmare! This year, 13 of the most skin-crawling phobias will be explored in all their gory glory with the dread-inducing Phobophobia 13. This experience is not for the faint of heart, as you'll come face-to-face with zombies, Jack the Ripper, snakes, clowns, monsters, spiders, hillbillies, ventriloquist dolls, murderous butchers, and more!

This blend of history and horror is like a cross between Edgar Allan Poe and the Saw films. It all works surprisingly well, in that it's scary as hell!

After descending into the dank south side base of London Bridge, you'll get sucked into the history of this span over the Thames. Your guide will tell you about the first version (built by the Romans in 50 AD), and the current one from 1979. In the years in-between (and since), the area has had more than its fair share of strange accidents, executions, and shocking murders.

With these London Bridge Experience and Tombs tickets, you'll soak up this mix of real and imagined history as the atmospheric moves from educational, to perplexing, to alarming. And before you know it, you're spat out of the vortex tunnel into the haunted crypt beneath the bridge. Flickering lights, temperamental generators, and bizarre noises create a spooky atmosphere.

But it's not just that; zombies, horrific clowns, mad doctors, and more lurk within the bowels of the London Tombs, wanting nothing more than to cause you to jump out of your skin. They'll succeed.

And if they don't, then you've shown yourself worthy of joining their ranks. So you may never make your way out of the depths of the bridge...

Borough Market is over a thousand years old and it has plenty of great stalls for exotic and delicious street food. If it's not raining, eat in the courtyard of nearby Southwark Cathedral.

This ticket includes a single entrance to the venue, in combination with other services. You can find this information under the section 'What's included' on this page.
Discounts for different age groups vary per product. You can find discount related information while selecting your tickets in the checkout. When choosing your tickets, check for ticket types with discounted prices. For example, some products have a ticket type 'Child', which is specifically for children. Remember to bring a valid ID to the venue if you've purchased a discounted ticket.
We support popular payment methods used across the globe, notably Visa, Mastercard, Paypal, Alipay and iDeal. Some payment options are specific to the language and currency combination you use when ordering tickets.
No, you don't have to print these tickets.Show your smartphone ticket at the entrance of the venue. Download the Tiqets app to get access to your tickets on your phone - even when offline.

The View from the Shard

The 95-story Shard was designed by world renowned Italian architect Renzo Piano. This architectural marvel is the tallest building in the European Union, and its distinctive shape has redefined the London skyline. If you visit The View From The Shard, you'll get a breathtaking 360-degree view of London from more than 300 meters above the city.
4.8 / 5 (1349)
From
$19.56
up to —19%
London

Though most famous for the imprisonments and beheadings held there it has, at various times, served as the royal residence, mint, menagerie, armory, observatory and as the holding place for the Crown Jewels - a function it still serves. Legend has it that six ravens must guard the tower at all times, or else the kingdom (as in United Kingdom) will fall. The ravens are still there, and so is this nearly thousand year old complex of stocky stone structures.
4.8 / 5 (1317)
From
$32.60