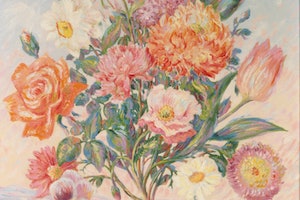 The first exhibition to show a largely unknown chapter of René Magritte’s work in its entirety, Surrealism in Full Sunlight compares Magritte’s works with those of Auguste Renoir. A period of sunny optimism brought on by the fall of the Nazi regime, particularly after their loss at Stalingrad, Magritte's 'Renoir period' was characterized by serene scenes and an "array of delightful things: women, birds, flowers, trees and an atmosphere of happiness."

Far from regarding this as a passing phase, Magritte considered his 'Renoir Period' important enough to make it the basis of a proposed in-depth reform of Surrealism. To this end, in October 1946, he sent André Breton his manifesto "Surrealism in Full Sunlight", which Breton rejected entirely.

This exhibition brings together around sixty paintings and forty drawings, beginning with several works from the end of the 1930s in which Magritte expresses the imminent outbreak of war and disaster. Magritte’s paintings are set alongside Renoir’s masterpieces, contemporary paintings by Picabia, and other works, notably by Jeff Koons, giving an idea of the influence of these little-known works.