Fly across some of Canada's most iconic landscapes with this experience 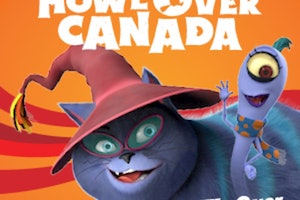 Scary season is getting off to a flying start at FlyOver Canada. Join Biker Mama the Witch on an unforgettable Halloween flight ride that'll leave everyone in stitches! HowlOver Canada will see you soar through the skies with a band of spooky sidekicks on your way to a music festival that's out of this world. 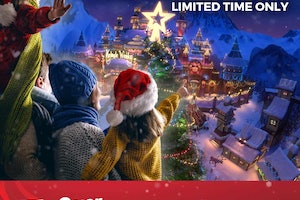 If there's one person who's a real expert on magical flights over the Canadian countryside, it's good-old Saint Nick. So this Christmas, take a leaf out of Santa's book, and join the jolly elf himself on an enchanting sleigh ride, and experience the magic of the festive season in a whole new way. Soar above Canada and then on to the North Pole to see Santa's workshop!

A ride so wild you'll be at the edge of your seat as you fly from coast to coast, from Newfoundland to British Columbia. Soar through 18 scenes that encapsulate the essence of Canada's beauty, spanning major cities to glacial glory. Suspended in an interactive chair and bombarded with effects like wind, rain, and even smells, you'll be propelled over Canada.

Expect scenes like the Rocky Mountaineer train, Iceberg Alley on the Newfoundland coast, Toronto by night, and dramatic scenes of heli-skiing. The high-tech ride will twist and turn you around, giving a genuine sense of flying through the air.

See snow-capped mountains, pass over prairies, and get to know the expanse of the Great White North. Cover 6,000 km in eight minutes while staying seated in Vancouver!

The Capilano Suspension Bridge is a 140 meter-long suspension bridge crossing the Capilano River in the District of North Vancouver, British Columbia, Canada. The bridge and surrounding park draw over 800,000 visitors every year, with various treetop adventure activities and ecology focused educational tours.
4.7 / 5 (156)
From
$43.80
Vancouver

The Museum of Vancouver is an award-winning civic history museum located in Vancouver, British Columbia. It's the largest museum of its kind in Canada, and the oldest museum in the city of Vancouver.
4.8 / 5 (4)
From
$7.59
Vancouver

Opened in 1931, the Vancouver Art Gallery is the largest art gallery in British Columbia, and home to over 11,000 pieces by artists such as Emily Carr, Marc Chagall, and many others. Its collections represent over a century of artistic achievement and reflect on the social and cultural identity of the region.
4.8 / 5 (9)
From
$18.22