One small step for mankind, one giant leap into learning space history 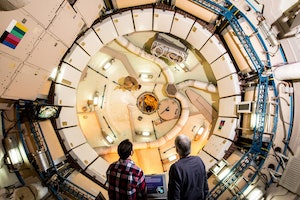 The Nasa Tram Tour is Space Center Houston's most popular attraction – with good reason! The Tram Tour allows you to explore a working NASA facility and is included in your ticket.

See the Astronaut Training Facility, where space-bound men and women prepare for missions. Visit the time-capsule that is the Apollo Mission Control Center, and imagine the joy felt by staff back in 1969, as Neil Armstrong confirmed that the Eagle had landed.

At the end of the Tram Tour, you'll visit Rocket Park to see the gargantuan Saturn 5 that flew astronauts to the moon. It'll leave you starry-eyed!

On 20 July 1969, Apollo 11's lunar module lands on the moon. It may be the most important day in the history of space exploration. After more than a decade of struggle in the space race, NASA lands a huge win for America, but also for mankind.

Now visitors can pay homage to the astronauts and dreamers who made it all possible, with a visit to the Houston Space Center. See crafts that have been into orbit, get up close to space suits, and find out more about the future of space travel.

A tram tour of the Johnson Space Center is the best way to start at Space Center Houston, the official visitor center of NASA. You'll see a colossal Saturn V rocket, walk above Building 9 – the classroom where astronauts have trained since 1980 – and enter Apollo Mission Control, where people first heard “The Eagle has landed”. Need to get your bearings on where to go next, the free app has a map and useful audio information in different languages.

It's one thing to learn about something, but seeing the command modules where astronauts sat during the Mercury, Gemini and Apollo missions is another thing entirely. The starship gallery offers the chance to see a lunar lander, and rover, along with modules from major missions.

Ever wondered what it's like onboard a ship? Step inside a space shuttle and see a mock-up of the cockpit. Visitors can enter two crafts, the Independence and NASA 905, a specially fitted Boeing 747 that served as Shuttle Aircraft Carrier more than 220 times.

Enjoy a retrospective of NASA's history on one of Texas' biggest screens at the Destiny Theater, and charter NASA's formation and most successful missions. Skip forward in time at the International Space Station Gallery and enjoy interactive exhibits, before seeing objects that have been in orbit.

The Menil Collection in Neartown Houston, Texas is a museum showcasing the private collection of John and Dominique de Menil. Inside you'll find some 17,000 paintings, prints, photographs, sculptures, rare books, and drawings. The collection features an impressive list of surrealist and contemporary masterpieces with works by some of the 20th century's biggest names like Picasso, René Magritte, Jackson Pollock and Andy Warhol. There's also pieces from antiquity and the medieval era, the tribal cultures of Africa, Oceania, and the American Pacific Northwest.
4.9 / 5 (327)
From
$0.00
up to —48%
Houston

The Houston Museum of Natural Science can be found in the Houston Museum District at the northern end of Hermann Park. Inside, you can find collections of dinosaur bones, minerals, fossils, and other special exhibits! During your visit make sure to stop and see the Foucault Pendulum – its 60-foot-long cable helps to demonstrate the Earth's rotation. Inside you'll also find the Cockrell Sundial, one of the largest sundials in the world.
4.9 / 5 (95)
From
$9.00
Houston

The Orange Show Monument is a folk-art environment in Houston's East End. It was built single-handedly by Jefferson Davis McKissack, a Houston postal worker, from 1956 until its completion in 1979. Maze-like in design, it includes an oasis, a wishing well, a pond, a stage, and several upper decks – made of concrete, brick, steel, as well as a wide range of found objects. Each individual piece of the Orange Show Monument was hand-placed and painted by McKissack himself.
4.8 / 5 (5)
From
$5.18