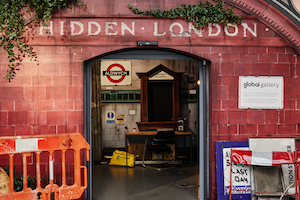 London hides many a mystery beneath the smog, asphalt, and innumerable branded coffee houses. Now, you can explore the history of the capital in all its subterranean glory with the London Transport Museum's Hidden London exhibit.

Rare archive photos, never-before-seen objects, vintage posters, secret diagrams, and even decorative tiles from disused stations have been brought together to provide a snapshot of London's now-concealed underground world.

Delve into the city's forgotten Tube networks and discover the incredible stories they keep. Learn about their importance in wartime Britain, including the underground railway's role in sheltering citizens from the Blitz – Winston Churchill himself holed up at Down Street station during the worst of the bombing.

Immerse yourself in the abandoned ticket hall of Aldwych station with an authentic 1930s ticket machine, and see other iconic locations recreated in the Global Gallery. You'll recognise some from the big screen, used in box-office winners Skyfall and V for Vendetta.

En savoir plus sur le site
Évaluations et commentaires
4.5
168 Commentaires
5
66%
4
27%
3
4%
2
1%
1
2%
Thierry, France
Bon musée
Eric, Royaume-Uni
Good, well planned museum. The only criticism for me personally was the sheer number of children that I do not think could appreciate what was there.
Liliya, Royaume-Uni
Lovely day out

The View from The Shard