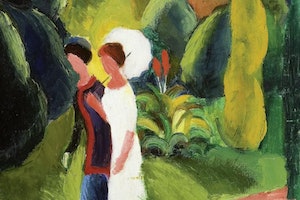 German Expressionism: The Braglia and Johenning Collections
Now on - Apr 20, 2020

Discover how young rebels from the Dresden artist community 'Die Brücke' brought their souls onto the canvas in the early 20th century. See how art by the likes of Emil Nolde, Max Pechstein, Ernst Ludwig Kirchner, Erich Heckel, Wassily Kandinsky and more went on to revolt against an industrialized society and its conventions.

Explore almost 120 exhibits from the Swiss Braglia Collection and the German Johenning Collection, showing for the first time in Vienna. 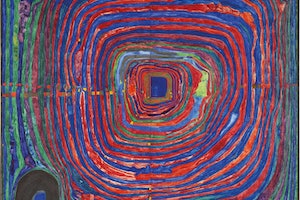 Friedensreich Hundertwasser is best known for his technicolor paintings and an outright ban on all straight lines in his art. His work became notorious for its bold, unruly themes and rich color schemes. Something less widely known is that he was also something of an Egon Schiele fanboy.

20 years after Hundertwasser's death, the Leopold Museum is dedicating an exhibition, conceived as a dialogue, to these two iconic artists. Comprised of some 170 exhibits, Imagine Tomorrow shines a spotlight on the central motifs and themes in both artists' works. Using previously unseen archival material, the exhibition traces the artistic and spiritual kinship of two extraordinary 20th-century Austrian artists.

The Leopold Museum houses one of the most important collections of early 20th-century Austrian art. Avid art collectors Rudolf and Elisabeth Leopold collected more than 5,000 exhibits over five decades. Housed in Vienna's popular MuseumsQuartier, the Leopold's dense collection features artists such as Egon Schiele, Gustav Klimt, Oskar Kokoschka and Richard Gerstl. The collection was consolidated in 1994, and in 2001 the museum opened its doors to the public.

When young medical student Rudolf Leopold purchased his first work of art in his mid-twenties, nobody could have predicted that it would become an obsession.

Forty years later Rudolf Leopold consolidated more than 5,000 artworks and objects into a private foundation valued at 575 million Euros. The collection, in its permanent home in a museum purpose-built by the Austrian state, is the largest and most-visited museum in Vienna's MuseumsQuartier.

The main focus of the collection is Austrian art of the first half of the 20th century, and includes the world's largest collection of works by the influential Austrian Expressionist Egon Schiele. The focus is his radical and expressive works, created between 1910 and 1915.

There's also an impressive set of works by world-renowned artist Gustav Klimt - co-founder of the Vienna Secession in 1897.

The permanent exhibition Vienna 1900 allows visitors to experience the diversity of an era marked by the idea of the Gesamtkunstwerk, (a 'total work of art' that permeates all aspects of life). The works on display here include Expressionist paintings, pieces from the Vienna Secession, and masterpieces of the Wiener Werkstätte - the Viennese arts and crafts movement.

Show your smartphone ticket at the fast-lane cash desk, which has the Tiqets logo on it.

More about the venue
Ratings & reviews
4.8
95 Reviews
5
82%
4
18%
3
0%
2
0%
1
0%
IOANNIS, Greece
I was really impressed by the way the museum presents the secession, which was one of the most revolutionary movements in the history of art.
Evgeniia, Russia
The museum is definitely worth seeing, the collection is magic! And the good thing is not to wait the whole line, which is usually quite big
Arthur, United States
Fabulous

This ticket includes a single entrance to the venue. Have a look at the section titled 'Ticket' to get a better idea of what you can do with this ticket.
Discounts for different age groups vary per product. You can find discount related information while selecting your tickets in the checkout. When choosing your tickets, check for ticket types with discounted prices. For example, some products have a ticket type 'Child', which is specifically for children. Remember to bring a valid ID to the venue if you've purchased a discounted ticket.
We support popular payment methods used across the globe, notably Visa, Mastercard, Paypal, Alipay and iDeal. Some payment options are specific to the language and currency combination you use when ordering tickets.
You don't have to print these tickets. See the section titled 'Instructions' on the product page for more information on this. Download the Tiqets app to get access to your tickets on your phone - even when offline.