Welcome to Picasso’s world, the most famous artist of the 20th Century

Auguste Rodin (1840-1917) and Pablo Picasso (1881-1973) are two of the world's most revered artistic minds. Their mastery is obvious in isolation, but Picasso – Rodin, a joint venture between the artists' Parisian museums, delves into bonds and connections you never knew they shared.

Displayed simultaneously at Musée Rodin and Paris Musée National Picasso, this exhibition details the artists' well-known connections by displaying their masterpieces side-by-side. But it also reveals some of their chance similarities in style, ethos, evolution, and experimentation, which, at different times and in different contexts, made for turning points in modern art. 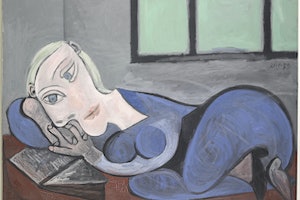 Pablo Picasso was a bookworm. Though it's not the trait for which we all know the pioneering master of Cubism, his passion for literature had a powerful effect on his work. Picasso: Lectures, relectures presents Picasso's masterpieces with a focus on the importance of storytelling within his art.

Alongside a portion of Picasso's personal library, visitors can trace the inspiration and creative process that went into paintings like Reclining Woman Reading, Portrait of Carlota Valdivia, and Portrait of Olga in an Armchair.

Picasso: Lectures, relectures is on display at Musée National Picasso-Paris until September 5th, 2021.

Access to the permanent collection and temporary exhibitions
Audio guide

The Musée Picasso in Paris has an incredible collection of over five thousand works of art. Dedicated to one of the most well-known artists of the 20th century, this spectacular 17th-century hôtel particulier is filled to the brim with iconic modern masterpieces by Pablo Picasso - as well as works that he collected. This ticket gives you priority entrance to the legacy of an artistic genius. Pop into Picasso.

Pablo Picasso is one of the most iconic figures in 20th-century art. The Spanish painter, sculptor and graphic artist is known for his inventive techniques and versatile avant-garde style.

Picasso used materials in ways that had never been used before, inspiring artists who came after to follow in his brushstrokes. His singular style inspired movements such as Futurism and Dadaism, and this museum showcases the range and depth of his work. It also includes unseen photographs of the artist himself, as well as works from Picasso's private collection - including pieces by Cézanne, Degas, and Matisse.

This museum is housed in the Hôtel Salé - a building that has been described as one of the most extravagant grand homes of the 17th century. It was renovated and reopened in October 2014 with double the exhibition space and new reception areas.

In the same way that Picasso reveled in mixing medias and creating new styles from old ways of working, this stately mansion is a perfect setting to experience some of the world's most groundbreaking modern painting and sculpture.

The three-year restoration has served the collection well - since 2014, the museum has expanded from 3 rooms to 34!

Use the ticket holder line and show your smartphone ticket at the entrance.

Housed in the stunning Beaux-Arts style Gare d'Orsay railway station, The Musée d'Orsay is home to significant and stunning works by painters including Gauguin, Monet, Manet, Degas, Renoir, Cézanne, and Van Gogh. It's widely considered to be one of the most culturally important museums in the world. Its entire collection is from the period 1848-1914, including many of the most significant Impressionist and post-Impressionist paintings ever created. Chronologically, the works come after those of the neighboring Louvre, and before the collection of the nearby Pompidou Centre.
4.8 / 5 (7939)
From
$91.19
Paris

Europe's largest collection of modern and contemporary art (oh yes, there is a difference!) is housed in a building that was deemed to be architecturally daring in the 20th century. The building features plumbing and piping on the outside and Picasso and Pollock on the inside. And to top it all off, from the rooftop you'll find gorgeous views of Paris and the Eiffel Tower. The Centre Pompidou is one of Paris's 'Big Three' museums – the other two being the Louvre and Musée d'Orsay. The Louvre holds art and artifacts from up until 1848. The Musée d'Orsay contains the world's greatest collection of Impressionist and Post-Impressionist art, all produced between the years 1848-1914. The Centre Pompidou holds 20th and 21st-century works (created after 1914). Altogether, the three museums house a complete timeline of Western art history.
4.7 / 5 (1645)
From
$85.10
Paris

One of the world's largest and most authoritative museums, the Louvre's magnificent classical silhouette (and funky glass pyramid) are well-known attractions in the center of Paris. But as nice as the Louvre is from the outside, its real magic is in the inside. The Louvre's collection ranges from Mesopotamian, Egyptian, and Greek antiquities, with masterpieces by Da Vinci, Michelangelo, and Rembrandt. With 35,000 works of art (all created before 1848), it's a big, and worthwhile, commitment. The Louvre is one of Paris's Big Three museums; the other two are the Museé d'Orsay (with Impressionist and Post-Impressionist art from the years 1848-1914) and the Centre Pompidou (with 20th-century works created after 1914).
4.8 / 5 (11484)
From
$84.00
Paris

In 1922 Claude Monet offered eight of his giant Water Lilies panels to the French state, as a way of commemorating the end of WWI. His only condition was that they be displayed in a suitable venue. The French government found the perfect spot: the Orangerie in the Tulieries Garden. The Orangerie was built in 1852 as a winter shelter for the orange trees that lined the garden of the Tuileries Palace. For a period of time it was also used as a storehouse for goods, a bunk for soldiers, and as a flexible exhibition space. Monet's generous gift transformed it into the Musée de l'Orangerie, a pre-eminent gallery of Impressionist and post-Impressionist paintings. The huge (and hugely impressive) Monet paintings are definitely the main event, but they are far from the only reason to visit. The museum also contains works by Cézanne, Matisse, Modigliani, Picasso, Renoir, and Rousseau, among others.
4.8 / 5 (592)
From
$114.85
Paris

Sainte-Chapelle is a Gothic-style royal chapel, known for its magnificent stained glass windows and for housing the Crown of Thorns. It is located on the Île de la Cité, in Paris.
4.9 / 5 (1703)
From
$66.84
Paris

The Musée Rodin in central Paris is dedicated to the life and work of French sculptor, Auguste Rodin. The French Impressionist sculptor crafted his later works in Hôtel Biron, which is now the Musée Rodin. Rodin donated much of his life's work to the French state, on condition that Hôtel Biron be converted into a museum celebrating his art.
4.9 / 5 (192)
From
$15.83