Health and safety measures are in place so you can enjoy culture with confidence.
NY Travel Advisory
For current New York State travel protocols related to Covid-19, please visit ny.gov. 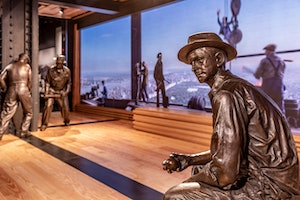 Looking up at New York's skyscrapers is quite an experience. But it's nothing compared to looking down on New York from atop its most famous skyscraper located in the heart of Manhattan. With ongoing exhibitions on the second and 80th floors, and two observation decks, the Empire State Building is the best way to see the Empire State.

The Empire State Building was completed in 1931, and this Art Deco icon still retains its charm. The smiling team of burgundy-uniformed personnel at the front door will usher you into this city classic. Marvel at the inspiring murals adorning the walls and ceiling as you go.

The most iconic spot on this skyscraper is the 86th floor, where many movies, like 'Independence Day' and 'Sleepless in Seattle', have filmed memorable scenes.

The view from up top is breathtaking, figuratively (and sometimes literally too!). With these Empire State Building tickets, you'll see panoramic views of up to six states from the surrounding open-air promenade and climate-controlled viewing galleries.

Take your time to snap aerial shots of Central Park, Times Square, the Brooklyn Bridge, and the One World Trade Center –and at least one of you beating your chest like King Kong did when he climbed the building.

For your own digitally guided tour from the ground floor right up to the top, the Official Empire State Building Guide app is a must-have. Download it for free from the App Store and Google Play.

The aluminum tower atop the roof (where the antenna is now) was intended as a mooring mast for zeppelins. Unfortunately this plan was deemed too dangerous due to the strong winds around the skyscraper (also, zeppelins tend to burst into flames quite often).

The Statue of Liberty National Monument and Ellis Island are located in New York Harbor. Both are a ferry ride away and can be accessed from Battery Park in New York or Liberty State Park in New Jersey.
4.8 / 5 (992)
From
$25.50
New York

Designed by architectural firm Skidmore, Owings & Merrill - who also designed the Burj Khalifa - One World is the tallest building in the Western Hemisphere and the sixth tallest building in the world. The One World Observatory - located on the 100th, 101st and 102nd floors - doesn’t stop bringing the 'wow'; from the moment you enter the building, to its elevator rides, all the way up to the top of New York City.
4.8 / 5 (2943)
From
$41.37
New York

Depending on how old you are, you might know 30 Rockefeller Plaza as the RCA, GE, or Comcast building, but most folks know it as 30 Rock. Commissioned by John D. Rockefeller, aka the richest person in modern history, this Art Deco beauty is 850 ft (260 m) tall and it's located in the very heart of Manhattan. 30 Rock was designed as the centerpiece of the Rockefeller Center, which comprises 19 buildings and what are probably the most famous Christmas trees and ice skating rink in the world. As well as the NBC Studios and the venerable Rainbow Room restaurant, 30 Rock has an excellent observation deck called the Top of the Rock.
4.8 / 5 (443)
From
$41.37