Rides, beloved characters, and more – it's not such a small world after all! 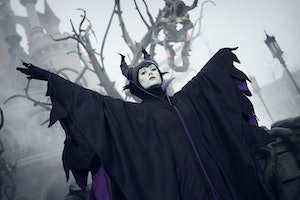 From September 26 to November 1, Disneyland® Paris will be spookier than ever before! Let yourself be carried away by a whirlwind of colors, thrills, laughter, and plenty of mischievous surprises. Disney characters, both good and bad, await you in their most impressive Halloween costumes.

Admire villains like the malevolent Maleficent or Captain Hook, explore the Twilight Zone Tower of Terror, or strike a pose and take a zombie selfie alongside Donald, Mickey, Goofy, and others. We won't spoil the rest – you'll have to see it to believe it!

The Magic Kingdom just got a whole lot more magical! See those lines to get in? This ticket is the sprinkle of fairy dust that'll make them disappear, getting you straight into the action.

Meet your heroes, soak up the enchanting atmosphere, and feel the thrills on Pirates of the Caribbean, Star Tours, and more! With more than fifty attractions spread across Disneyland® Paris and Walt Disney Studios®, the 2 Parks ticket option lets you fully enjoy both Disney universes in one go!

Whether you like adrenaline-pumping thrill rides or gentler adventures, there's something for everyone at Disneyland® Paris. Kids (and kids-at-heart) will love meeting their larger-than-life heroes.

Opt for the two-parks ticket and also get access to Walt Disney Studios® Park, where attractions feature a big dose of silver screen excitement!

At Walt Disney Studio®, you'll get animation-themed excitement like the Ratatouille dark ride, the Tower of Terror, and a Toy Soldiers Parachute Drop.

The Backlot and Production Courtyard will draw you deeper into the world of movie magic, with rides, attractions, and shows. All told, there are five thrilling zones that put you (and fun) in the spotlight.

No need to wish upon a star – the real magic is already here waiting for you.

Skip-the-line at the attractions
Food and drinks
Additional info

One of the world's largest and most authoritative museums, the Louvre's magnificent classical silhouette (and funky glass pyramid) are well-known attractions in the center of Paris. But as nice as the Louvre is from the outside, its real magic is in the inside. The Louvre's collection ranges from Mesopotamian, Egyptian, and Greek antiquities, with masterpieces by Da Vinci, Michelangelo, and Rembrandt. With 35,000 works of art (all created before 1848), it's a big, and worthwhile, commitment. The Louvre is one of Paris's Big Three museums; the other two are the Museé d'Orsay (with Impressionist and Post-Impressionist art from the years 1848-1914) and the Centre Pompidou (with 20th-century works created after 1914).
4.8 / 5 (11457)
From
$23.72
Versailles

This luxurious 17th-century French palace is a masterclass in excess. It has hundreds of acres of magnificently landscaped gardens, more than 700 rooms, a large collection of French Renaissance art, an opera house, and a 75-meter long hall of mirrors lined with priceless statues and busts. There are no half-measures in its conception or execution – it has more than 1,200 fireplaces! It's one of the most visited attractions in France, as well as a UNESCO World Heritage Site.
4.6 / 5 (3082)
From
$21.35
Paris

From just behind the Eiffel Tower (which you'll probably be seeing up close anyway), the Bateaux Parisiens river cruises depart for trips up and down the Seine. With a sightseeing option as well as a trés elegant dinner cruise, you'll be able to find the trip to suit your taste. Enjoy panoramic views of the Musée d'Orsay, Notre-Dame Cathedral, Pont Neuf, and many more UNESCO World Heritage Sites as you float down the Seine. It all starts here.
4.6 / 5 (494)
From
$17.79