Tiqets’ update: Due to the developments in the COVID-19 outbreak, we have extended our cancellation policy. Read about it here.

See the best of the Pearl of the Danube

Discover one of the most spectacular parliamentary buildings in the world!

Most beautiful thermal baths in Budapest

Your ticket to the best of Budapest's Hungarian highlights

Learn about Jewish customs and history

A relaxing day soaking in baths, with a massage

A musical night out at Danube Palace

Out and about in Budapest

See all of Budapest's museums - and St. Lukács thermal bath - with one pass

Let the music play as you eat, drink, and enjoy

48 hours to revel in the beauty of Budapest

All things to do in Budapest

Most beautiful thermal baths in Budapest

A relaxing day soaking in baths, with a massage

Soak up a massage in an enormous medicinal bath

Let the music play as you eat, drink, and enjoy

Much of the center and historic areas are easily navigable on foot. If you’re looking for an easy way to get around, a pair of walking shoes is your best bet. Bolt is Budapest's answer to Uber or Lyft, and they have an easy-to-use Android and iOS app. The public transport system is comprehensive too; trams traverse most of the city for as little as €1 and EU residents over 65 benefit from free public transport. Be aware that, except for night buses, tickets must be bought before boarding. They can be bought at Metro stations, vending machines at some bus stops, or at newsagents. Ticket inspectors can be anywhere – best to stay on the right side of the law!

The land of experiences

Ruin pubs are good all year-round, but Budapest really comes into its own during the festival season. The city sees back-to-back festivals that cover the areas of culture, music, food, wine, and naturally, paprika (though this last one is more popular in the countryside). Sziget Festival is an unmissable summer experience. This is the country's biggest music festival that was founded in 1993 and draws up to 500,000 people to the city. The best part? The location. It's set on an island on the Danube, Óbudai-sziget. Also, if you're into fast cars, then traverse an hour out of the city to witness Hungaroring, where the Formula One Hungarian Grand Prix is held each year.

Budapest boasts six Michelin restaurants, but you can have great food in Hungary's capital for a decent price, too. For a true culinary experience, head to the Jewish quarter; skip the goulash and go straight for signature dishes like goose leg with mashed potatoes, stuffed cabbage, or grilled trout covered with almonds. Sample the hearty Hungarikums culinary heritage which features Hungarian Gray cattle or Mangalica pig. After your meal, chill out in a ruin pub, where expats, locals, and tourists alike gather to socialize over beers, Törley wines, and pálinka. PS: Budapest's best chefs have street food stalls in the Hold utca market. Taste fine Hungarian cuisine at fair prices.

What to do in Budapest for 3 days 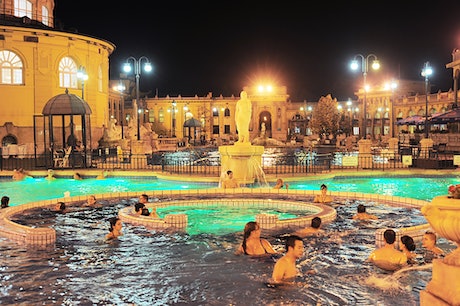 Slip into one of Budapest's mineral-rich spas, and steep yourself in history and invigorating waters. Stroll through Városliget (City Park) which leads to Széchenyi Baths – the largest thermal bath complex in Europe. Built in 1913, this neo-Baroque complex boasts 18 pools and 10 saunas. Gellért Spa, located in the elegant, Art Nouveau Gellért Hotel has 13 pools of different temperatures, plus wave machines, plunge pools, a sauna, steam room, and showers – all surrounded by Roman architecture. Whichever style of spa you choose, make sure you don't miss the chance to soak up one of the finest experiences Budapest has to offer. 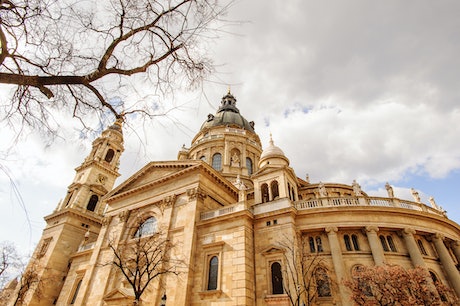 The neo-Classical St. Stephen's Basilica is dedicated to Hungary's first king, St. Stephen, and it's still home to his mummified right hand: the Szent Jobb (Holy Right Hand). How lovely. The building's 1906 inauguration ceremony was attended by Emperor Franz Joseph I. The largest church in Hungary, it can hold up to 8,500 worshippers or visitors. Its beautiful cupola is 96-meters tall – the same height as Budapest Parliament Building. In fact, Hungary's legislation says that no building in Budapest can exceed this mark. Visitors climbing to the top can get spectacular views of the city, and look down on the cafe patrons in St. Stephen's Square. 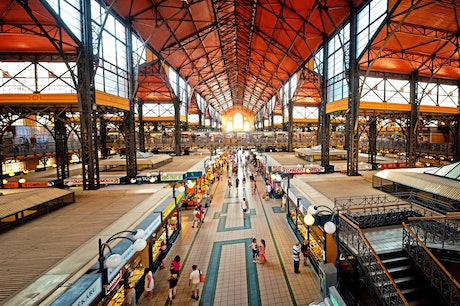 Stuffed to the rafters with delicious artisan foodstuffs, Központi Vásárcsarnok is the place to come and stock up on meat, fresh produce, and of course, paprika. It's not just a vibrant modern hub of Budapest life, it's also steeped in history; the metal roof is original (from 1897), including the decorative Zsolnay tiles. When it opened, ships sailed right into the market using special docks. Today, the Central Market Hall remains a wonderful food market and a must-see, even if you don't buy anything. As a bonus, the upper level has food stalls with seating and is perfect for grabbing a quick lunch and mingling with locals. 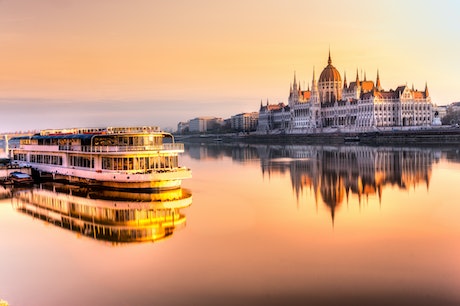 The Danube river runs right up the heart of the city, dividing Buda and Pest. The river has seen the city through its best and worst moments in history. Getting on a boat and cruising the city will really help you appreciate The Pearl of the Danube. You'll see sights like the Chain Bridge, Gellért Baths, the Citadella, as well as poignant World War II memorials. Because normal boat rides can be a bit lacking in creature comforts, we've got water-bound options which include a Coffee Cruise, a Wine Cruise, a Dinner Cruise, and a Party Cruise. Come to think of it, you could put them one after another and have an unbeatable day on the Danube!