Top Rollercoasters in Europe That Are Off the Rails 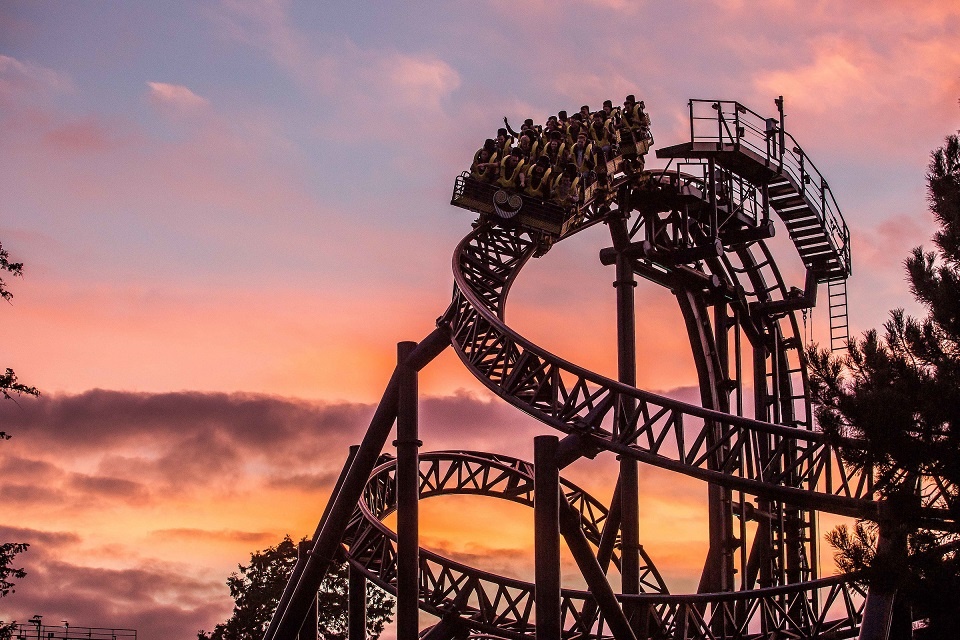 It almost always starts the same; you’re inching your way upwards, your heartbeat increases with every click of the chain moving along the conveyor belt. Nervous energy builds up in your gut, as you wonder, ‘Why am I doing this?’, but it’s intermingled with fearless excitement. And then, everything stops. You wait, suspended in time, then you fall.

Rollercoasters are just the best – but, which are the best of the best?

Location: Alton Towers
Built: 1994
Theme: Fly through the excavated remains of an extraterrestrial

Nemesis holds the unbeatable title of being Europe’s first-ever inverted rollercoaster. You can find this beast of a machine in the UK’s thrill-seeker’s paradise, Alton Towers.

Much of the ride is obscured by the treeline, which makes it all the more exciting. First-time riders won’t know what to expect. Instead of climbing upwards, Nemesis begins its course by winding around a ground-level pit before plunging down into its depths, skewering the corpse of an alien.

The 80-second ride features barrel rolls, downward helixes, vertical loops, and a waterfall of blood that just about misses the feet of dangling riders. It’s a ride that will leave you joining the back of the queue again as soon as the safety restraints are lifted.

Location: Alton Towers
Built: 2018
Theme: Be sacrificed to the Wicker Man in a Pagan ritual

The buzz surrounding Alton Towers’ Wicker Man is understood the moment you set eyes on the wooden behemoth with a protruding effigy of a man/ram’s head encircled in flames.

Wicker Man is a trip from start to finish; even the queue is themed so you don’t get bored. Enter a Pagan village and be sacrificed to the spirit of the Wicker Man that rules the land. The ride is incredibly set up, with Pagan drums hounding you from the start of the queue to the moment you’re strapped in.

After a classic ascent and drop, this 70-km/h coaster treats you to death-defying close calls with oncoming obstacles and also some hair-raising airtime, so you can appreciate the incredible fire-and-smoke-engulfed structure.

A 77-meter crawl to the top, followed by an 82-meter drop into a dark tunnel at a gravity-defying 85° angle. That’s all you need to know about Poland’s tallest, fastest, longest, and scariest rollercoaster. Oh, did we mention it reaches a top speed of 142 km/h?

As an ill-fated space traveler whose mission to Saturn’s moon Hyperion has gone terribly wrong, your spacecraft is sucked into a black hole, and you’ve come out on the weird end of a space-time vortex, landing on a duplicate of Earth. Typical!

The queue takes riders through a replica space station and does a good job of setting up the ride. But the real star is the initial drop. After plummeting into the abyss, try to notice the inversion, black hole tunnel, banked turns, and water features – if you manage to catch your breath!

One of the fastest and tallest rollercoasters in Europe? Check. A thrilling 78-meter drop? Check. Based on a mythical land in the Himalayas? Check. Crosses under the tracks of another death-defying rollercoaster? Check. A splash zone? Why not, check!

What more could you ask for in a rollercoaster, really? What it lacks in inversions, Shambhala makes up for in camelback hills, helix turns, and a splashy dash through an artificial lake that may leave you slightly soaked, but hungry for more.

When a ride wins multiple awards which all have the words ‘fastest’ and ‘longest’ in them, you know you’re in for a bone-rattling good time. Taron is a striking anthracite-black multi-launch steel rollercoaster boasting an intricate track unlike any other – it crosses over and under itself 116 times!

Soaring over the dramatically desolate Viking-themed Klugheim area in Phantasialand, riders are in for some visually stunning airtime. Overbanked turns mean that riders narrowly miss walls of jet black rock faces and waterfalls that show up out of nowhere.

Two launch zones make this a ride with real speed (117 km/h). The second launch section is situated at the lowest point in the canyon and is taken without pause, rocketing riders to borderline aggressive speeds with sudden changes in direction. No inversions? Trust us, you won’t miss them.

Red Force is the tallest and fastest rollercoaster in Europe as of 2019, and for this reason alone, it’s an unmissable experience. Boasting multiple supercapacitors to launch you from 0 to 180 km/h in 5 seconds, this rollercoaster is, as the Prancing Horse symbol suggests, built for speed.

It’s located in Ferrari Land, which is a part of PortAventura. You’ll see Red Force’s 112-meter-tall top hat peeking out from across the park before you even reach the winding queues for this world-famous ride.

Don’t expect banked turns, helixes, inversions, or speed hills – Red Force comes in at just under 40 seconds and is pure speed, from start to finish. Two twisting 90° turns allow riders to defy gravity before plunging back down to Earth at mind-bending speeds, punctured only by a flat brake run. Simplicity meets the apex of nerve-racking speed here.

Keen to try hit as many of these epic rollercoasters as possible in one big European road trip? Make sure you check out our tips for drive holidays.