The best things to do in Rotterdam 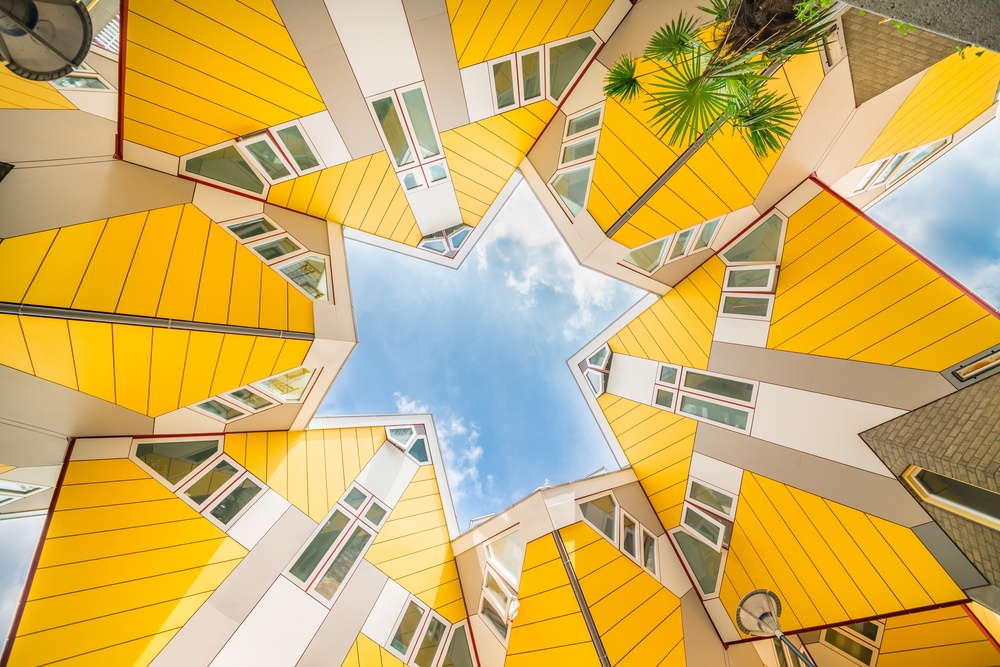 Locals will tell you it’s the better of the two ‘dams (sorry Amsterdam), and a weekend spent in this beautiful city might just convince you. Here are some of the best things to do in Holland’s lesser-known second city.

Check out the architecture

Rotterdam is different to most Dutch cities. Severely bombed during World War II, it faced a period of ambitious rebuilding over the following decades. Walking around now feels like tracing back the history of various architectural styles and movements over the years, from picturesque old buildings that survived the bombing to strikingly modern skyscrapers. Perhaps the city’s most popular architectural attraction is the ‘Kijk-Kubus’, commonly referred to as the Cube Houses, designed by architect Piet Blom.

The Markthal is a large glass-domed market hall featuring elaborately decorated walls, and a huge variety of delicious food from around the world. It’s like the Foodhallen in Amsterdam, except you don’t need to viciously krav maga people out of your way to find a seat. It features everything from delicious coconut cookies (we love you, Madame Cocos) to one of the best Asian supermarkets you’ll find in the country. Even better, there’s a regular market just outside the door on Saturdays and Tuesdays, which is one of the biggest in the Netherlands.

Amsterdam might be famous for its museums, but there are plenty of gems in Rotterdam too. The Port of Rotterdam is the biggest in Europe, and it’s no surprise that the city therefore has one of the best nautical-themed museums in the world. Rotterdam’s famous Maritime Museum celebrates six centuries of seafaring, and was founded all the way back in 1874. A visit here is a great way to learn more about the local history – and how important the water was, besides simply looking great.

Shop at the Koopgoot

Koop means buy. Goot means gutter. The Dutch language can be notoriously literal (see also: the Dutch words for vacuum cleaner and seal**), hence the Koopgoot is a large open-air shopping lane located slightly below ground level. This gives the impression of a gutter, albeit a very nicely maintained one with plenty of shoe stores. Locals and visitors alike come here to get a bargain, and options range from affordable fast fashion to more luxurious items at Hudson’s Bay or De Bijenkorf.

Rotterdam has some excellent parks. Arboretum Trompenburg dates back to the 19th century, and offers a tranquil retreat from urban life just 15 minutes away by tram from Rotterdam Central Station. You can also visit the stadium of local club S.B.V. Excelsior next door, and pay tribute to Netherlands legend Robin van Persie. Remember when he scored that goal? Make sure you take some time to relax in the originally named Het Park (‘The Park’), which is a local favourite nestled directly at the base of the famous Euromast.

Go to the zoo

The city also features one of Europe’s most beautiful zoos: Rotterdam Zoo, also known as Diergaarde Blijdorp. This conservation-minded site has a huge range of animals, from ferociously cute red pandas to chilled out polar bears. It’s also one of the top ten zoos in the world in terms of breeding programmes for endangered species. In other words, it’s perfect for families and animal lovers who’d like to see spectacular creatures with a focus on conservation rather than exploitation.

Here’s an insider tip: to make things easier, get a Rotterdam Welcome Card. It gives you free transport around the city, as well as discounts at some of Rotterdam’s top attractions and activities – including the zoo, the Markthal, and some great museums. It’s an easy way to make sure you get value for your money, and saves you time and energy.