Seville has been through a lot. A HELL of a lot. Think Moorish invasions, strict Catholic rule, devastating earthquakes… it’s enough to make lesser cities crumble. But, as the saying goes, what doesn’t kill you makes you stronger. While most Moorish monuments were torn down by the Catholic church, Seville’s were combined with new designs. As for the earthquakes, restorers wasted no time in recreating original buildings, so we can still see the best of Seville’s glory days today.

If you’re more into grizzly conquer stories and quizzing tour guides than lying on a beach, check out the following sites for your ultimate history fix.

It’s interesting to see how the other half live. Their wealth conjures images of high ceilings, extravagant artwork and intense competitions to see who had the biggest fountain. Whether it’s medieval conquerors or royals in glossy magazines, their residences exude power and make neighbors green with envy. And that’s easier than ever if you live somewhere like the Alcázar.

Built by the Moorish kings of Al-Andalus (the Arabic name for Spain’s Muslim kingdom), it’s the oldest royal palace in Europe still in use today. Apart from the Alhambra in Granada, it’s also the most prominent example of mudéjar architecture in Spain. You’ll wish you were next in line to the throne…

While the upper levels are used for official royal family visits, the ground floor, walls and gardens are all open to the public, letting you get a piece of royal lifestyle. The interior is a mishmash of styles, with Christian monarchs adding their own personal touches to the original design and making it unique among other Moorish monuments. 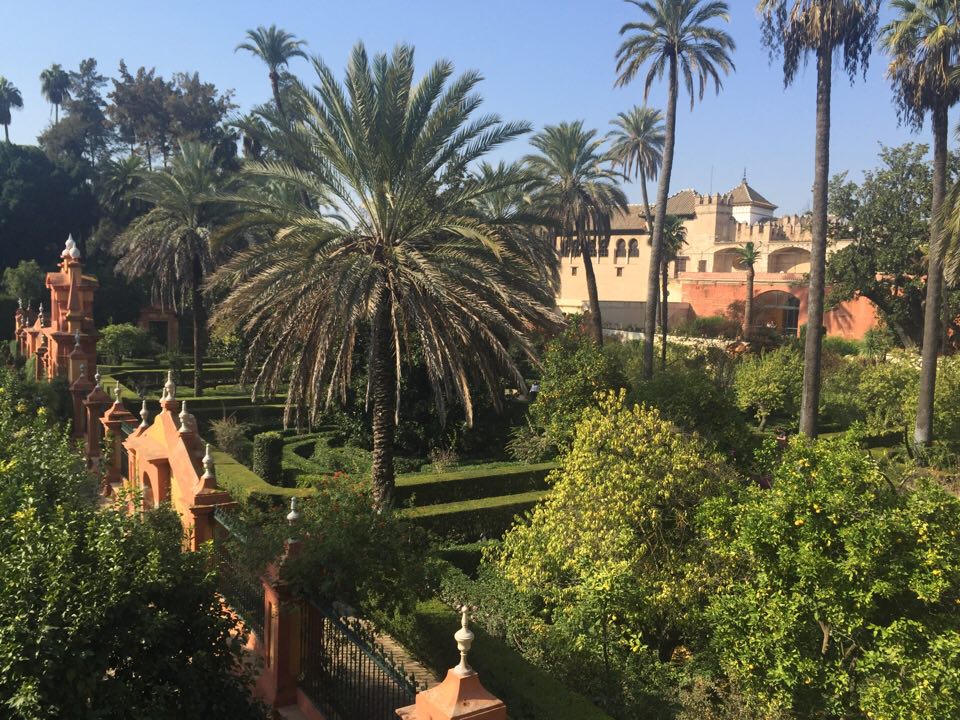 Despite its popularity, the Alcázar‘s palace isn’t its main attraction. That title is entirely reserved for the palace gardens. You’ll see for yourself while wandering among the fruit trees, green mazes and exotic flowers, all created to provide palace residents with fresh food and beautiful surroundings. There’s even the odd peacock strutting along the orchards!

Water has a starring role in the form of jets, pools and ponds scattered around the gardens. If don’t have time to see them all, head straight to the Fuente de la Fama. Created by Italian architect Vermondo Resta, this musical fountain uses a mechanism similar to that of a music box and plays tunes on the hour everyday from 10:00 to 19:00. The original mechanism was destroyed during an earthquake, and restorers have done their best to recreate what the music would’ve sounded like when it was first crafted.

Look up and make sure not to break your neck – this imposing building is the largest Gothic cathedral in the world. The sole purpose of its design was to shock visitors with its sheer size and opulence. It took over a century to complete (1402-1506) and involved hefty costs for the Catholic clergy, but many would agree that the effort paid off.

The interior boasts the longest nave in Spain and the third largest in the world. The central one is 42m high and heavily gilded in a way that is more customary of the Renaissance period. Add the great box-like choir loft and Gothic altarpiece and you’ve got yourself one unforgettable site.

The Giralda is Seville’s official symbol and the city’s tallest building for over 800 years. It’s named after the original weather vane placed on top (girar means “to turn” in Spanish), which was sadly destroyed by another earthquake and ultimately replaced by a small bell and cross. This city just can’t catch a break.

Built all the way back in 1195 as part of the Aljama mosque, the old minaret was used call Muslims to prayer, and its bell toll could be heard for miles. When the cathedral was built over the mosque’s original site, the clergy couldn’t bring themselves to tear it down, so it was instead incorporated into the design as a bell tower.

Along with the Alcázar, cathedral and General Archive of the Indies, it was declared a World Heritage site in 1987. You can climb to the top via a series of ramps, which were placed there so that bell ringers could comfortably climb the minaret on horses or donkeys. Sadly using donkeys isn’t an option today – you’ll have to walk up instead.

The Plaza de España is a square in Parque de María Luisa, specially designed for the 1929 Ibero-American Exposition. The buildings around it form a perfect semicircle, accessible by fours bridges representing the ancient kingdoms of Spain (Navarra, Aragón, Castilla and Granada). In the centre lies the Vicente Traver fountain, and the walls around the square are decorated with tiled alcoves that represent each of the 52 provinces in Spain (including the cities of Ceuta and Melilla).

Think it looks familiar? The square is regularly used as a film location, most notably in the 1962 Lawrence of Arabia film and as the City of Theed in the Star Wars movie prequels (for those who bothered with Episodes 1-3).

If you were to venture to the New World back in the 1500s, chances are you’d stop in Seville. All trade ran through the city’s Guadalquivir river, and it only makes sense that such an important port would have an equally imposing watchtower. Now housing a naval museum , the Torre de Oro (Golden Tower) is all that remains of the old city walls. Theories regarding the name’s origin vary wildly: some say it was originally covered in golden tiles, while others claim it was used to hide stolen Mayan and Incan gold. Tour guides even encourage to make up your own theories!

With so many historical favorites in Seville, it’s impossible to list them all in a single blog post.

Organize your trip with Tiqets.com, or read the blog for more travel inspiration.

Breakfast, lunch and dinner in Paris