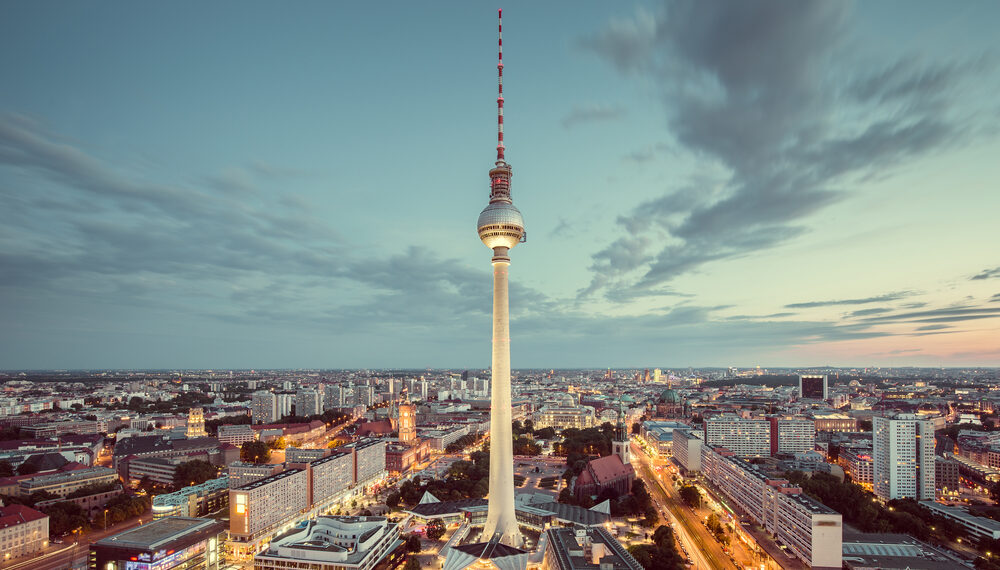 A visit to the TV Tower, or Fernsehturm in German, is an absolute must when visiting Berlin. Inaugurated in 1969 and at 368m high, Germany’s tallest building is quite a sight to behold. But, for the real showstopper, you’ll have to brace yourself and head to the very top.

And boy is it worth it.

Its massive 203m observation deck is only eclipsed by Sphere, a 207m revolving restaurant from where you can see a beautiful 360° view of the entire city over a 30-minute rotation. There’s nothing like sitting down with a drink and watching Berlin unfold from all angles. It’s even better when the weather’s good, with views of up to 80km on a clear day. We could keep the numbers coming, but you need to get yourself up there to get the full experience.

And you won’t be the only one. This iconic building attracts around a million visitors each year and, trust us, you don’t want to be stuck at the end of that queue! It pays off to get skip-the-line tickets and plan a daytime or nighttime visit of the tower and restaurant in advance. The TV Tower is also a great place to plan the rest of your Berlin adventure, as this unique setting is perfect for spotting sites and planning where to go next.

Don’t quite know what you’re looking at? Here’s a quick sum-up of what you’ll spot in the near distance. Just sit back and relax with some delicious food and drink. We’ve got the hard stuff covered!

Construction work on the TV Tower didn’t exactly start off on the right foot. It was originally meant to be built on the southeastern outskirts of Berlin. However, when work was already underway, city planners realized the tower would disrupt airplanes landing at nearby Schönefeld Airport. How did that go unnoticed for so long? The site was then moved to Alexanderplatz in the city center, where it still stands today.

If you look straight down, you’ll notice a large red building located right on Alexanderplatz. This is the Berlin’s city hall, which goes by the witty name of Red City Hall or Rotes Rathaus (obvious enough?). It’s open all day from Monday to Friday and entrance is free. Head in and check out the heraldic hall (where state visitors are received) and the great banqueting hall used for official receptions and ceremonies. Spoiler alert: they aren’t red.

Further to the right, you’ll find another familiar sight: Berliner Dom, the city’s cathedral, with its iconic blue dome and surrounding cupolas. Chances are that, when visiting the TV Tower, you’ll have either just come from the cathedral area or are heading there afterwards. Right in the middle of Berlin’s historic center is the Mitte district. Be sure to go: it’s an architectural kaleidoscope, where Baroque and neo-Classical monuments rub shoulders with contemporary buildings.

In front of the majestic cathedral (or behind when you look at it from the TV Tower) you’ll find Lustgarten, a beautiful little park that’s perfect to relax in or take in the sun (an elusive thing in Berlin!), all with the Berliner Dom in the foreground. It’s also a great place to take pictures, almost as impressive as taking one from the Fernsehturm itself.

If you look even further to your right, you’ll see another Berlin staple: the Altes Museum (Old Museum) and, next to it, all the famous venues that make up Museum Island: Alte Nationalgalerie, Pergamon Museum, Neues Museum, and the Bode Museum. A visit to this amazing cultural isle is well worth your while, as it’s home to the legendary bust of Nefertiti and the Pergamon Altar. All five museums are full of works from Ancient Egypt, Byzantium and Berlin, so you’d better set aside a few hours to get through all of them.

Next, look past the cathedral. You’ll easily spot Unter den Linden, a broad boulevard lined with splendid churches, galleries, museums and university buildings. If you walk down it (or follow it up with your eyes from the TV Tower), you’ll end up at the world-famous Brandenburg Gate and its six columns, also easy to locate from the Tower. If you go there (which you certainly will!), consider visiting the Brandenburg Gate Museum, a fascinating place to discover the city’s history.

Beyond the Gate, you can just make out a vast row of trees that stretches into the horizon. This is Tiergarten, a huge urban park with woods, meadows, gardens, fountains and, towards the far side, the Berlin Zoo. If you rent a bike while in Berlin, you can easily cruise around the park and discover many beautiful corners!

If you focus on the large boulevard running through the park center, you may see something gold shimmering in the distance. It’s the Victory Column, erected in 1873 and designed to commemorate the Prussian victories against Denmark, France, and Austria – Prussia must’ve felt pretty proud of itself back then.

The column was actually moved in 1938: it used to stand in a square right next to the Reichstag, also known as the German parliament. And where is that, you ask? Just shift your eyes from the Brandenburg Gate and follow the park towards the right until you see a building with a large cupola and (usually) some German flags on the corners – that’s it. Another item for your long sightseeing list!

Now look towards the other side, where the Spree river runs towards the east … found it? You’ll see several distinctive bridges crossing it. The most far fetched of all might be Oberbaumbrücke, with two tall red towers that separate the Friedrichshain and Kreuzberg districts, two very popular (and extremely hip) spots to hang out in the evening, have some beer by the waterfront and enjoy the sunset, or visit one of the many bars and cafés in the area before heading to one of the nearby clubs. It’s a fun way to finish off a day of sightseeing, so go on and soak up the atmosphere.

If you have some extra time beforehand, you can visit the East Side Gallery, next to Oberbaumbrücke. This long section of the Berlin Wall is a memorial to freedom, decorated with amazing paintings and graffiti. Artists like Jürgen Grosse, Dimitri Vrubel, Siegfrid Santoni and Bodo Sperling, amongst others, have all left their stamp here, so don’t forget to take a stroll along this open air gallery when visiting Berlin!

Now it’s time to head down and get immersed in everything the city has to offer!

Why not check out other Berlin hotspots on Tiqets.com? The view from above is amazing, but you’ll never fully experience Berlin until you’re right in the center of it all!

Sandra is a German translator who bought a one-way ticket to Amsterdam last year to join the Tiqets team as a Content Editor and to live her passions for translating, traveling, foreign countries, and relocating in 3-year intervals.