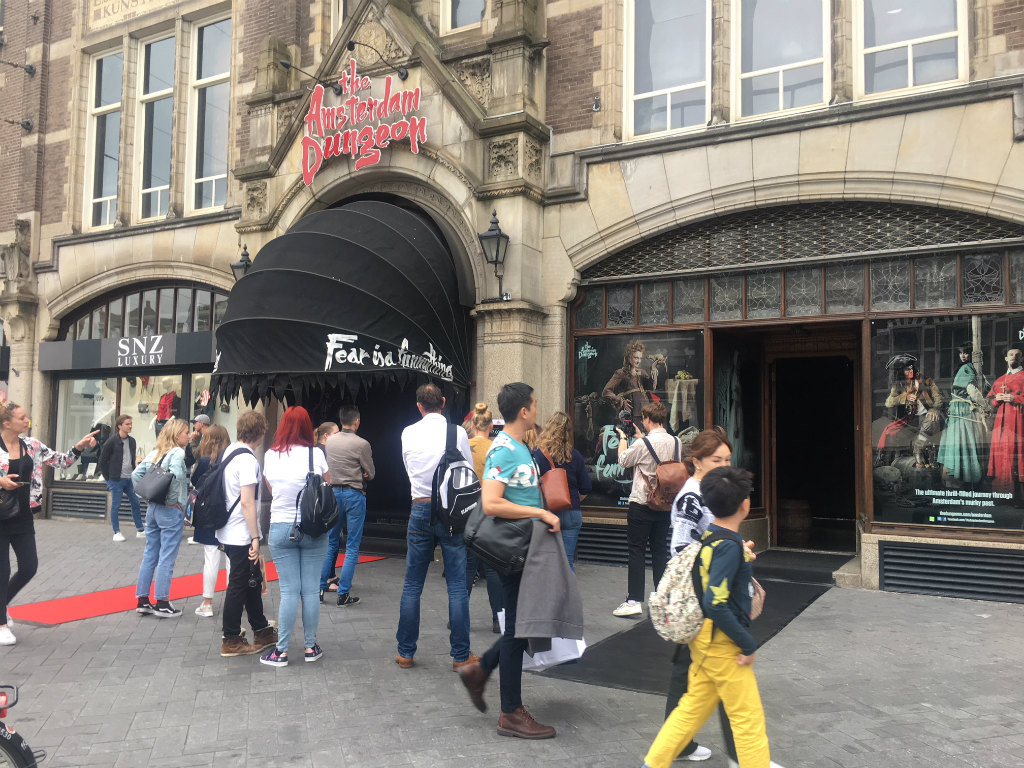 Something sinister is lurking between Amsterdam’s twinkling canals and charming boulevards. The Forest of the Dead might sound like a description of Rembrandtplein after 3am, but it’s actually the latest terrifying attraction at The Amsterdam Dungeon. With the emotional support of two plucky colleagues and some locally brewed Dutch courage, I paid this grim spectacle a visit…

Welcome to The Amsterdam Dungeon

Arriving at the gates of the dungeon, we were greeted by a stern inquisitor dressed in blood red robes. With a blunt decree, he directed us each through separate entrances, in order to disorient us and sew fear in our ranks early on. Tiqeteers are fearless by nature though, so gathering ourselves, we descended the dungeon’s cavernous hallways. With arms linked and pulses racing, we prepared for the horrors within.

The Dark Past of Amsterdam

Like all of the attractions at The Amsterdam Dungeon, The Forest of the Dead is based on the real events of the city’s gruesome past. With so many Nutella shops and hipster bars scattered around these days, it’s easy to forget that Amsterdam was once a place of witch-trials and torture chambers. The Forest of the Dead takes you back to the aptly named Gallows Field of the city’s northern harbor. This is where 17th-century convicts came to hang out – literally!

We were lead through a dark narrow passageway into a misty clearing, where a dodgy-looking hooded figure was waiting. Decaying corpses swayed in cages above, and a conspicuously empty noose dangled before us. One creepy sermon about the Gallows Field later, and it was time to enter the forest pathway – into the belly of nightmarish scares.

The Forest of the Dead did not disappoint. We crawled and stumbled through dusty cobwebs, slimy vines, and ghastly hands that reached out through the thicket to grab us as we passed. An ominous cacophony of shrieks and thudding sounds barely masked the beating of our stout Tiqets hearts. We knew it couldn’t be real, but the overwhelming sense of dread wasn’t to be reasoned with. Fear is a funny thing indeed!

A couple of brave souls even dared to film their experience. It’ll give you a good idea of the horrors (and cackles) to come!

We eventually emerged with sweaty brows and pale haunted faces. Having laughed, trembled, and screamed our way through this dark chapter of Amsterdam’s history, it was sweet relief to be back amongst the living. We found an extra measure of comfort at a table of complimentary scary cocktails. An uncanny looking batch of Bloody Marys proved to be particularly popular.

Horror fans, adrenaline junkies, and anyone who enjoys jump scares with tongue-in-cheek dramatics should definitely check this out. It’s a hell of a time!

Once you’ve survived The Forest of The Dead, why not enjoy your time among the living (dead)?

Join Tiqets and other warm bodies for more adventures around Amsterdam, or read the blog for more travel inspiration.