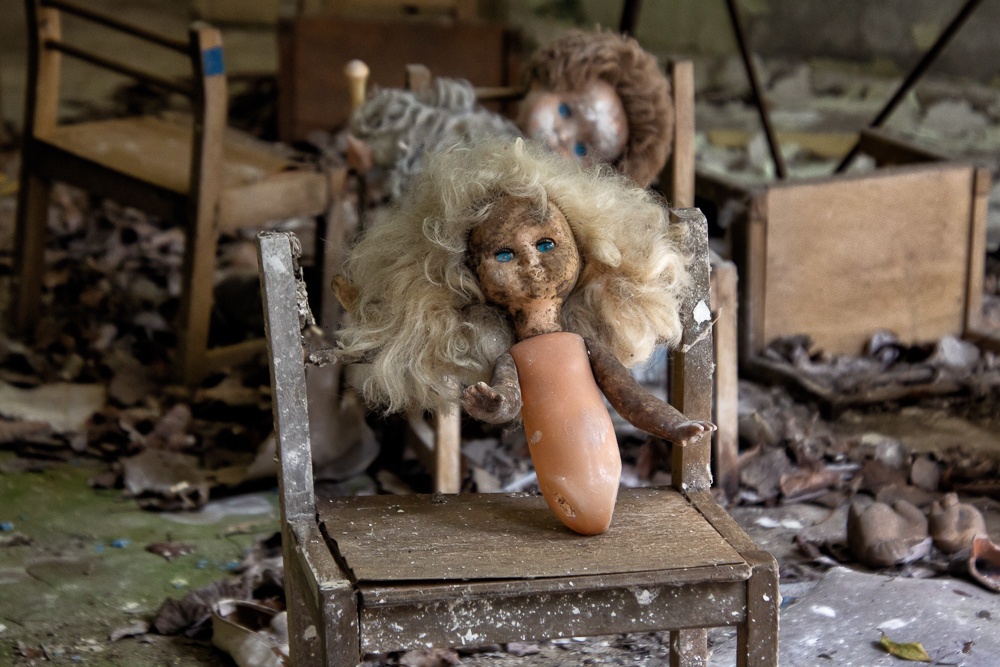 Some people call it ‘the heebie-jeebies’. Others call it ‘the creeps’. In Russia, a scary movie might leave you with мурашки (murashki), and a spooked Spaniard might get the escalofríos. Wherever you’re from and whatever you call it, we’ve all experienced the anxiety that comes with dark alleyways, abandoned buildings, and moonlit cemeteries.

Believe it or not, some people go looking for creepy places that give them the shivers. So, in the spirit of giving the people what they want, we’ve found some of the most authentic, bone-chilling places you can visit in Europe (rather literally in some instances). From a supposedly haunted castle in France to an abandoned amusement park in Ukraine, read on for creepy places to visit in Europe that’ll give you the willies.

Descend into the Catacombs of San Gaudioso, Naples

Fifth-century Tunisian bishop Saint Gaudiosus might have turned in his grave if he knew how many squatters had joined him within Naples’ Catacombs of San Gaudioso. His sacred tomb became something of a post-life retreat for nobles and extra-Godly Christians over the centuries. Then there’s the unfortunate influx of plague and cholera victims who arrived during the 17th and 19th centuries.

The reality and history of the Catacombs give them a legitimate spook factor. If that’s not enough, how about frescoes designed to incorporate human bones? That’s right; Giovanni Balducci, a 17th-century painter, is responsible for one of the most weird and wonderful art projects on Earth. The bones themselves may have been removed, but the paintings of medieval nobles still bear the holes where their skulls were once mounted to the walls.

If you can’t shake off the skeletal intrigue after your trip to the catacombs, the Fontanelle Cemetery is located just 13 minutes away. Its skull-laden ossuary is a haunting tribute to those who perished during the plague. Undeniably creepy, this underground resting place is also a powerful space of reflection and an important part of Naples’ history.

Courtesy of another stellar HBO drama, more and more dark tourists are flocking to Chernobyl for a spot of eerie abandonment. The city of Pripyat has been deserted since 1986 when the disaster at the Chernobyl Nuclear Power Plant saw the city evacuated in 48 hours. Around 50,000 people, mainly plant workers and their families, were displaced, leaving their city to descend into lifelessness.

In Pripyat today, the Geiger counter readings are still extremely high compared to those of a normal city. In small doses, there’s little to worry about in terms of safety, which has prompted Ukrainian tour companies to start taking people inside the exclusion zone.

One of the most hard-hitting locations in the city is an amusement park that was set to enjoy its grand opening when the plant’s fourth reactor exploded. Supposedly, the park opened early, for just one morning, to distract the public from the horrors being dealt with down the road.

A faded yellow Ferris wheel surrounded by overgrown shrubs and weeds has become symbolic of a hollow city left behind. The bumper cars are parked in such a way you can picture them slowly coming to a stop all those years ago, never to be bumped again.

Pripyat tours are available from Kiev for up to two days, with professional guides and permits included. Send us your Pripyat photos by using the hashtag #Tiqets on Instagram, if you dare to visit one of the creepiest places to visit in Europe!

Say your prayers at the Haunted Vicarage of Borgvattnet, Sweden

Clergymen and women are generally accepted as being trustworthy members of society. This is probably why the ghostly tales surrounding a tiny vicarage in the Swedish countryside are so captivating.

The Vicarage of Borgvattnet and its haunted rooms have long piqued the interest of scare-hunters. Between 1927 and 1945, the telltale signs of ghostly residents terrified a succession of chaplains and their families. Unexplainable moving objects, strange sounds in the night, crying spectral figures sitting at the end of the bed, that sort of thing. One godly resident was even thrown from his rocking chair!

During the summer and autumn months, you can stay the night in Borgvattnet Vicarage. Who needs a spa hotel when you sleep in a haunted house?

It’s nicknamed ‘Church of Bones’, and the kinds of images that have just popped into your mind are exactly what you can expect from Sedlec Ossuary. This 19th-century chapel is adorned with the skeletal bits of 40,000 to 70,000 people. Yes, you read that correctly. As creepy places to visit go, this is one of the spookiest in Europe.

Located in the once-thriving town of Kutná Hora, easily accessible from Prague, the ossuary is situated underneath the Cemetery Church of All Saints. Born out of the necessity to ease the cemetery’s overcrowding during medieval times, the organisation of the bones is as mesmerizing as it is macabre. Yours won’t be the only jaw on the floor!

Visitors can walk around wide-eyed taking in chandeliers, lamps, candelabras, and walls, all made of bones. The mastermind of the space even signed his name on the walls with… you get the idea. You have to wonder what the good folk of the 1400s would think of their tibias and fibulas being used in such a way.

A day trip to Kutná Hora from Prague is a great way to get out of the capital and explore the Bohemian countryside. We’d recommend a guide for this one, there’s almost a thousand years of history attached to the ‘Bone Chapel’.

Hunt for the Green Lady at Château de Brissac, France

No list of creepy places to visit in Europe would be complete without a haunted castle. Château de Brissac, a short drive from Angers in France, has the benefit of being both stunningly beautiful and loaded with ghostly intrigue.

You’ll find little mention of Charlotte de Brézé’s murder on the Château’s website. A shady story from the building’s long history, the daughter of Charles VII of France was killed by her jealous husband, Jacques de Brézé, in 1477. While her not-so-noble husband escaped with a fine of 200,000 gold crowns, Charlotte spends eternity roaming the halls of the castle, according to legend and reported guest encounters. The Green Lady or la Dame Verte is said to frequent the tower room of the chapel, when she’s not floating about the Château’s opulent rooms.

You can take a tour of the Château to try to learn more about its gruesome past. For an eye-watering price, you can even stay in one of its grand chambers overnight in the hope of meeting the ghostly lady of the house.

Not got your required dose of the dark and dreadful?

As you would expect, there are endless haunting tales to be heard throughout America’s 50 states, if you know where to look. Here are five of the most haunted places in America you can visit next time you’re in the US of A.