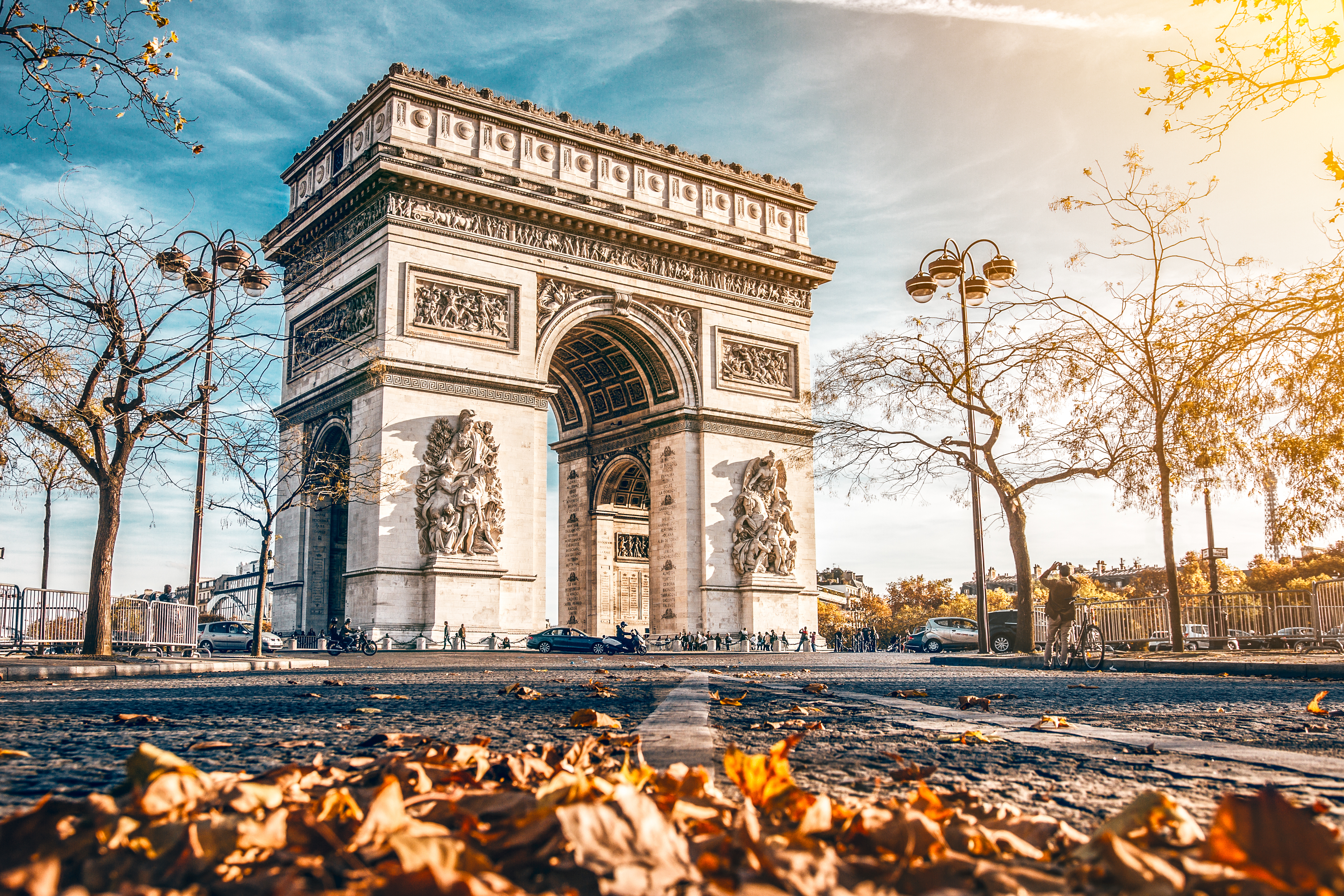 Some of the best autumn destinations are in Europe. Experience an autumn festivals or simply enjoy a warm coffee in a cozy city square. Plus, thanks to low-season on the horizon, you can take advantage of cheap hotels and enjoy quicker access to cultural attractions. But, where would you go? Here are our top picks for Europe in October.

As the masses of tourists wind down and the days become less sweltering, October presents the perfect window of opportunity to conquer Florence’s cultural riches. Flights tend to be cheaper too, especially nearing November.

Low season is settling in on the city, but it’s as alive as ever with festivals and events. The Feast of Santa Reparata is celebrated on October 8 each year. Events with a more international flair include the almost-nightly Amici della Musica and the Florence Biennale.

You can also finally score those fabled free entrances into state-run museums in Florence, which include the Uffizi and the Galleria dell’Accademia. Free tickets run out quickly during the height of summer, so this is your chance to take the city in at your leisure.

Day-time temperatures hover above 23°C which makes Lisbon one of the warmest places in Europe in October. Portugal’s picture-perfect capital city by the Tagus is always a good destination any time of the year. Thanks to its lived-in atmosphere, the city is always buzzing with the hum of local life.

You can catch a number of events like the Lisbon Marathon and Lisbon Fashion Week. Or, opt for a boat ride on the Tagus for a stunning sunset cruise. If you’re on a budget, hop aboard the public transport ferry to Almada across the river. It allows for stunning views of Lisbon in its entirety. Once across, walk along the water’s edge to Ponto Final, an excellent seafood bar by the beach!

Thanks to low-season, hotel and flight prices drop significantly. For a day trip, nearby Sintra plays host to Quinta da Regaleira, Pena Palace, and the Moorish Castle. Cabo da Roca, the end of Europe, also has amazing hikes that the cool October weather allows for.

Munich in October means beer halls, hunting season, folk festivals (Kirchweihdult), and of course, Oktoberfest! As soon as the mayor announces ‘O’zapft is!’ and taps the first barrel of beer, Munich’s world-famous Oktoberfest begins. This bucket-list experience can be had from September 21 until October 6, 2019.

After being immersed in the city’s beer-induced delirium, clear your hangovers at the local parks. Ost Park, West Park, and Englischer Garten are set ablaze by the fiery colors of autumn.

A lot of Munich’s permanent features, like the Alter Peter and the Glyptothek, provide a safe refuge from Munich’s Oktoberfest frenzy. Hungry? The Viktualienmarkt and Elisabethmarkt are still buzzing and provide the best hangover-friendly breakfast food!

Will Warsaw be cold in October? With temperatures around 13°C, yes, but Warsaw takes to autumn brilliantly. As the cold settles in, the cozy bars and lively squares welcome chilly locals and travelers alike. Voted the third-cheapest destination in Europe, this city is good to you any time of the year.

See history laid out at POLIN and the Warsaw Rising Museum. The Old Town Market Square is teeming with rustic restaurants that serve up pork knuckle with a pint for around ‎€10. Bellies full, amble to Nowogrodzka, a street lined by trendy bars patronized by young locals. Also, Chopin is performed live every night somewhere in Warsaw. For the most intimate recital, try to find Chopin Salon.

Hitler wanted Warsaw wiped off the maps, and the Soviets did it no favors either. In 1945, the city was reduced to rubble, and its population fell just above the 100,000 mark. But you won’t be able to tell just how much the city suffered from all the colorful squares, lively bars, and shimmering skyscrapers. Warsaw is resilient.

Paris is always a good idea. Autumn means pink-hued skies over the Seine and pavements lined by crunchy orange leaves thanks to the city’s tree-lined boulevards.

Montmartre comes alive with Vendanges de Montmartre, the neighborhood’s vibrant wine harvest festival. You see, Montmartre produces its own wine right in the heart of Paris. With the Sacré Coeur in the background, the cobbled streets come to life with musicians, performers, parades, and of course, wine!

You can pop into museums without the throngs of tourists. Tie in a park and museum experience by walking through the Jardin des Tuileries and visiting its Musée de l’Orangerie. Paris in October is bliss.

Switzerland’s Italian-speaking region of Lugano is worth visiting. In October, the weather remains good enough for cable cars and cog railways to be operating, so outdoor adventures are still on the table.

The city’s Mediterranean vibes emanate from its pastel-hued townhouses flanking narrow, cobbled streets. Lago di Lugano is popular with sun-seeking tourists, but its glacial waters mean you probably won’t get much swimming done during the high season anyway (unless you’re especially brave!).

Perhaps the most beautiful autumn destination in Europe, even the dreary Dutch weather can do no harm to the city’s charm.

The city is always bustling with life, thanks to a rich student and international culture. For electronic music lovers, the Amsterdam Dance Event happens between 16 to 20 October and is the largest club festival of its kind. Now’s also the perfect time to tuck into a dimly lit bar on the Leidseplein and order a weather-appropriate bokbier.

Prices in the Dutch capital can skyrocket during summer. But October brings with it off-season hotel rates, shorter lines at museums and attractions, and fewer tourists unwittingly attempting suicide on the bike lanes. Honestly, it’s the best time to visit Amsterdam before the throes of winter.

Why is Prague always so busy? The City of a Hundred Spires doesn’t adhere to the conventions of tourism.

Prague is alive throughout October with the city-wide Strings of Autumn music festival, the Prague Coffee Festival, and the luminescent Prague Signal Festival, which features light installations all over the city.

The unrelenting beauty of Prague makes it one of the best places to visit in October, despite the cold nip of winter. Outdoor attractions like the Astronomical Clock and Charles Bridge are always open to the public. The city also boasts the second-highest density of bars in the world, need we say more?

October in London is a mix of spooky, artsy, and tasty.

The city does Halloween right, with a horde of ghost tours, dress-up club events, and haunted venues to pop into. The London Literature Festival (October 17 – 27) also ushers in the looming gloom of winter in the most poetic way possible.

There are over 60 food events happening throughout the month thanks to the London Restaurant Festival. Perks include special menus and discounted prices at participating restaurants. Arrive hungry!

Consider taking a walk through London’s many city parks after all that face-stuffing. We suggest Kew Gardens which has unique outdoor exhibitions each year. This year, until October 26, you can see illuminated glass artworks by Dale Chihuly during your stroll.

If you’re looking for the warmest place in Europe in October, look no further than the Canary Islands. Okay sure, it’s an island off the coast of northwestern Africa – but it’s still a Spanish autonomous community!

Tenerife has a remarkable ecological diversity and many microclimates. You can go from winter, spring, autumn, to summer, depending on which part of the island you visit. Temperatures oscillate around 20º and 28ºC in October, so you could still take a dip in the Atlantic.

The mild weather also allows for hiking. If you’re missing the cold, brave the journey up Mount Teide, one of the highest volcanoes in the world when measured from the ocean floor. Temperatures up here can plummet to the negatives in October.

The lack of tourists in October means you can have the beaches almost to yourself. For a unique experience, seek out Tenerife’s crystal-clear volcanic rock pools, like Charco De La Laja. Or, sunbathe on cliffs carved out by the ocean at Playa Amarilla.

Thanks to the island’s year-round warm climate, these places are good to visit all throughout winter, too. If you’re already booking your flights, we don’t blame you!